This review was originally posted on the website of the Perfect Information podcast. It has been reposted here for archival purposes. 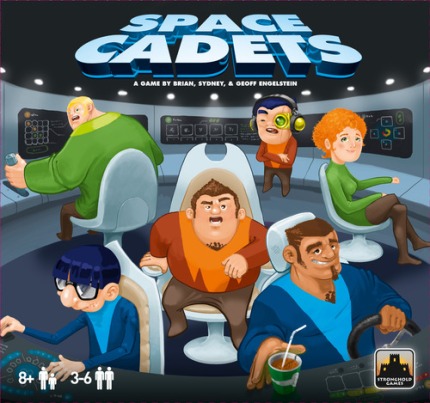 Space Cadets can be confusing at first. There are a lot of rules. In fact, each of the eight stations in the game plays by its own rules. Although most of them will be familiar to you. Weapons play a bit like Ubongo and Crokinole. Helm is a simplified game of RoboRally. The player on Shield duty has to put together poker-style hands out of a random selection of numbered tokens. Sensors needs to pick the one cardboard piece out of a bag, that matches a randomly drawn card, going only by sense of touch. Using the tractor beam is basically playing Memory, and the hyperjump – which ends the game – is Yahtzee with a few special abilities thrown in. And so on. 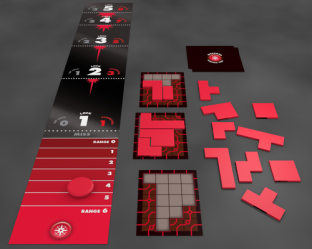 The station’s rules are familiar, but there’s a sand timer (or an app, if you’re so inclined) running each turn making the seemingly trivial minigames something of a stress-inducing challenge. Doubly so if the success of the entire group this turn depends on you. Being a team of space cadets is a cooperative project, that can be hard and stressful, but also very rewarding.

While that’s all well and good, there are a great number of cooperative games out there. Why should Space Cadets stand out? And the answer is as surprising as it is obvious, once you’ve played it. This is a game that encourages teamwork and not mere coordination. Games like Pandemic or even Space Alert are all about communication. Whether it’s negotiating consent, or refining efficiency and clarity under pressure, the games’ designs drive people to arrange their individual actions in such way that they result in victory.

Space Cadets takes a different route. By giving everybody a fundamentally different task to do, and a time limit in which to accomplish it, play is less about learning to be more efficient and more about the group’s success becoming more than the sum of its parts. This is a game in which each victory truly feels like a team effort. Moreso than in any other cooperative game out there. Not only because there is little room for bad players devolving into alpha gamers, but because each player’s objective is clear and its value to the overall success is immediately apparent. If the helmsman fails to position the ship just right, it causes ripples throughout the rest of the round, if not the game. If the engineer doesn’t get the energy that the weapons officer needs, the ship won’t be able to defend itself. And so on…

But all those achievements in designing a truly team-based board game come at a price. Space Cadets is unwieldy for the uninitiated. Actually, it is unwieldy for the seasoned, experienced player as well. While the individual stations are fairly easy to wrap your head around, the various markers, movement rules and enemy special abilities, that you need to handle outside of the timed phases of each turn, are just overwhelming. You can often see what each rule adds to the experience, but getting the game to flow naturally will take quite a few plays. If you are the one introducing this game to your group, you practically have to memorize the entire rulebook. If the game slows down, or even halts during play, all momentum is lost and the scaffolding that holds up an otherwise hilarious, engaging and fun experience becomes painfully apparent. 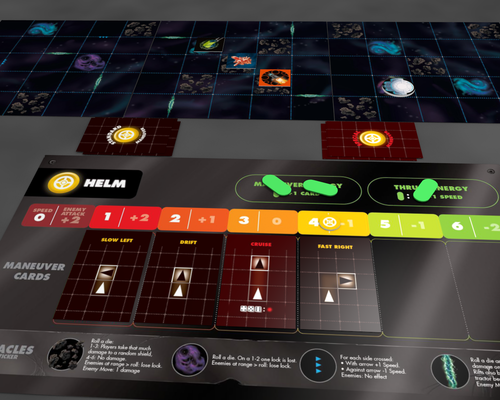 Space Cadets is a gamer’s cooperative game. This isn’t what you put on the table to ease non-gamers into the hobby, because the lack of cut-throat competition will lead to a more inclusive experience. Space Cadets is difficult to handle, and when you start playing, it’s also not particularly easy to succeed at.

Joe: Now, when an enemy ship comes chasing after us – me being a good Captain – I want to get clear shot at the aliens, so I arrange my speed and maneuvers just right and then who opens fire?
Georgios: Now, that’s he first thing you’ve said right.
Joe: I DON’T EVEN KNOW WHAT I’M TALKING ABOUT!
Georgios: Don’t get excited. Take it easy.
Joe: Who flicks the disk at the enemy, what had a sensor lock from picking up the right shapes out of a bag by touch. The ship has been moved into range by I don’t know. And this will all be arranged by tomorrow. A perfectly played turn.
Georgios: Yeah, it could be.
Joe: But the enemy ship gets to fire back and cause damage.
Georgios: Because.
Joe: Why? I don’t know. And I don’t care.
Georgios: What was that?
Joe: I said, I DON’T CARE!
Georgios: Oh, she’s manning Shields!

Intentionally or not, Space Cadets locks players into a strong sense of group identity and shared purpose. Which is not a pretentious way to say it is thematic – although I might use it at some later point to say just that. It is a cooperative game, which you will remember for the social experience it provided and not the challenge that its missions threw at you.

This is a game about playing together.