Terraforming Mars. – I don‘t like calling games overrated. I think it‘s a juvenile way to beg for people‘s attention by publicly disliking something that others love. I don‘t think Terraforming Mars is overrated. But I will note that there are a small handful of games where I diverge considerably from the majority consensus in the gaming world. Which is not to say that I love all the games that everybody loves. But I can often find something to appreciate about well regarded games. But there are exceptions. There are games that many gamers rave about, that not only fall flat with me, but where I feel that their flaws are more memorable than their strengths. That is the case with Terraforming Mars. 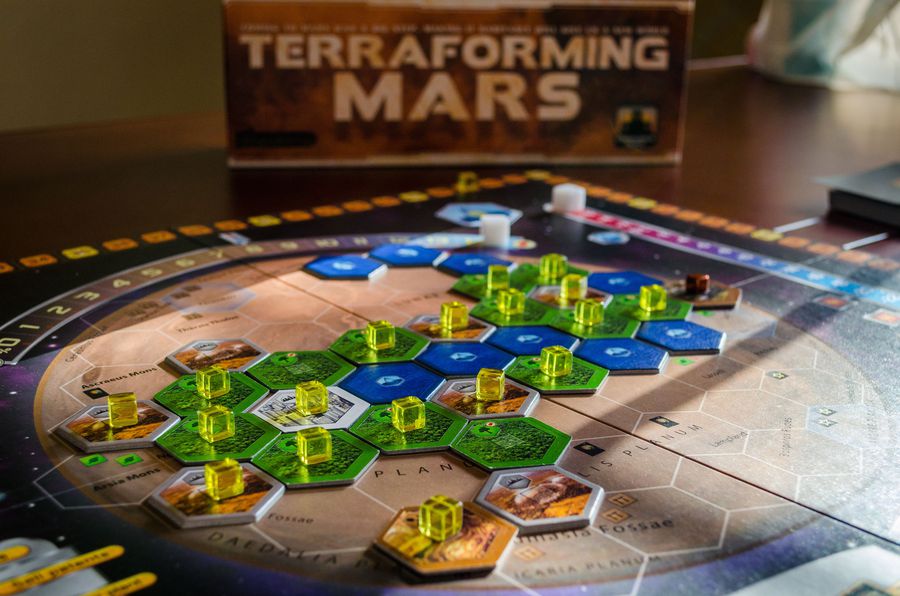 Terraforming Mars, as you probably know, is a card-driven engine building game „about“ making Mars inhabitable for humans. You have your tableau of resources to manipulate in front of you, cards to create synergies with and various objectives to pursue in an attempt to get the highest score at the end of the game. Your tableau resources come slightly interconnected and are tied to one of the five (I believe) types of cards, which in turn function differently by type. Some are long-term abilities, some are one-time effects, some are long-term investments and so on and so forth. On top of that all the cards appear to be unique, so you‘re dealing with an absurdly large pool of cards to experiment with each time you play the game. This was the first sign to me, that Terraforming Mars was in trouble. Variability is a fairly inelegant way to keep people‘s attention. It suggests that the game‘s main appeal is not in actually playing it with people, but in playing around with a different set of options you (singular) are given every time you play. It may seem like a subtle shift in design focus, but I would argue it greatly changes what the game actually offers players.

Your focus lies in managing the swirl of cards you get into your hand and trying to squeeze the most and best out of it, all while the parameters of Mars change during play. Your goal is to push your VP score past those of your competitors. That‘s a very abstract way of describing it, of course, but at its heart this is the experience of playing Terraforming Mars. A sea of options that you need to steer your way through. It‘s something that a lot of hobby gamers easily recognise, and it‘s a somewhat reliable source of entertainment for a vocal segment within the hobby. You struggle your way through those challanges in an attempt to beat everybody else’s VP score to win the game.

To be clear, handling the complexity of all the options, variables and the many ways they interlock is one of the biggest and most rewarding challenges Terraforming Mars offers. It’s arguably one of the main reasons gamers are drawn to mid-to-heavy eurogames. They offer a tangible intellectual challenge. Your mastery of said challenge can be measured by how easy you find it to win, i.e. to pursue a consistent and successful strategy. The ideal is to become so competent as to remain unfazed by whatever the game throws at you. If you can retain complete control throughout the game, you have proven your mastery. You have beaten the game.

I would argue that this is enough motivation for the majority of hobbyist gamers. As video games have already proven, mastering a daunting task is a point of pride and can fuel decades-long obsessions with individual games.

Once a game‘s challenge has got its hooks in you, you want that mastery. You want that sense of complete control over all the variables of its design. These games aren‘t about beating your friends, they are about beating your past self. But old design habits and received wisdom die hard, so naturally players are also pitted against each other. But this is where the game unravels.

Once you introduce player competition into a game‘s design, you place a single question into the middle of the table: „who will win?“ You loudly communicate it as the main source of tension and the concluding reward for playing the game. Competitive play is often not optional, too. Sure, you can choose not to care about it, but ignoring its demands on your behavior often means, that the overall design of the game never quite gels. Its incentives do not grab you. Tactical and strategic decisions lose their urgency. You often need to completely reframe your decisions to support whichever goal you‘ve decided to pursue instead.

But even if you do accept the need for competitive play in such designs, you open up another, very common problem in game design. If the dominant conflict, and main source of tension is the question “who will win?”, the game rapidly falls apart when that question is too easily or too quickly answered. Players need to be on relatively equal footing for a game to fulfill its potential. The more evenly matched the players, the more intense, exciting and rewarding a competitive game will be. Which in turn means, that the larger the divide between player experience levels, the less appealing it becomes. It’s why most games between a Chess grandmaster and a complete newbie are dull and their resolution a foregone conclusion. But Chess is merely the starkest example of the appeal and the logic of player-vs-player style games.

Obviously, a designer needs to find a way to make sure that a group of disparate ability still gets the best possible experience out of their game. There are a number of ways in which a game can attempt to bridge that gap between players. A stronger element of randomization can help to de-emphasize such a disparity. The drawback being, that it also dilutes the sense of control a veteran player seeks to achieve with the game. A sense of control which, as mentioned above, is something a lot of gamers actively seek in their games. Cosmic Encounter is often rejected by those players, put off by the chaotic and seemingly uncontrollable nature of the game.

Then, there is of course the option of turning the game into a co-operative experience, thereby removing the sense of player-driven competition altogether. Here, the drawback is that coop games require slightly different skill sets from its players to function as intended. Pandemic, for example, requires decent negotiation or at least good leadership skills to avoid becoming a torturous exercise in passive-aggressiveness.

There is the option of giving out personalized objectives. Modern classic Chaos in the Old World tried to soften up its race for victory points, by giving each player effectively personalized mid-level objectives. Players need to fulfill individual conditions to advance on their personal victory track.

If that ideas gets pushed too far, the drawback of this approach becomes apparent. This was the case with Vast the Crystal Caverns. An entire game, build around personalized objectives, becomes almost inaccessible to most groups. A competitive game that is dull may be bad, but it‘s still better than a competitive game you never get to play.

Finally, there is the option of introducing handicap rules to slow down advantaged players. Some fans of TM have argued, that this is what happens with the corporation cards. But I‘m not sure I agree. For the most part, those mostly just narrow your choice of strategy. In some cases they give a player a leg up against others. Neither of those actually qualify as handicap rules, which are about making the game harder, not competition more likely. Handicap rules mean that mastering a game on a higher difficulty is still satisfying and rewarding, whereas winning it on an easier difficulty feels quite hollow.

Competitive gaming and all its pitfalls is hardly a new topic. And one of the most common responses has been that playing against a „better“ player motivates people. It gives them somebody to learn from or lets them improve their „skill“ at a game by observing the person that beat them.

My problem with that argument is, that this is more wishful thinking than anything resembling reality. Simply put, I don‘t think that trickle-down player skill actually works. We do not learn from being beaten by somebody who is more experienced.

Failure is not the great motivator. If that were the case, the entire concept of education could be radically remade and improved by flat out failing everybody at the beginning of the school year. Failure demotivates people. Doubly so, if you expect it anyway. Unless, of course, your ego is so pronounced that any defeat would send your ambition into overdrive, playing against a vastly more experienced player is only going to lead to a dull experience. So any competitive game that doesn‘t offer ways of addressing this imbalance in player ability, will regularly create unsatisfying play experiences.

But if the only way to avoid such experiences is repeated play and practice, you‘re not really dealing with a game that has a steep learning curve. You are playing a game with a flaw, that you simply find ways to avoid.

To reiterate the opening point, I do not think that Terraforming Mars is overrated. But I think we hobby gamers are too used to these kind of setbacks, frustrations and losing battles. We consider them a necessary price to pay, before enjoying a game fully against a group of more experienced players. Maybe it’s time to question that habit.