Theme isn‘t lama’s strong suit, despite colourful art design that has no relation to the game itself. Reiner knizia on the other hand isn‘t known for theme, so much as for smart and careful rules. All you do is shed your numbered cards (1-6) by playing a matching number or one higher. Naturally, the titular lama card functions as a link between card 6 and 1. Simple as the game starts off, it stays that way throughout until somebody’s score goes above forty points.

Raking in points at the end of each turn is where things start to get interesting. In most card games of this size, you‘d be dealing with event cards or similar rote ways to spice things up. Generally these design choices are a bit cheap, but lama finds a different way to develop its own unique play dynamic. Holding on to playable cards starts making sense, since all cards of the same number/color count as one at the end of a round. Tactical and strategic considerations start to take shape, without the game losing its speed and ease of play. Suddenly you find yourself playing game after game, as lama draws out your inner gambler. 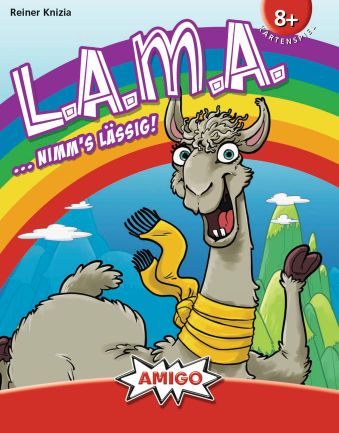 As entertaining as it is, the game isn‘t a revelation so much as proof of impeccable craft. Ruleswise there‘s little to criticize as the game doesn‘t stray from the level of complexity and depth you could reasonably expect. Evidently its biggest drawback is that the highs and lows aren‘t impressive enough to make the game memorable.

Having played a few rounds of lama you start to appreciate the game‘s subtle craftsmanship. Unlike other simple games, the straight-forwardness doesn‘t really wear out its welcome even after the twelfth game of it. Most of the time you will find yourself caught between goals, incentives and rewards due to the second simple rule that really opens up the game. At the end of the turn in which you emptied your hand, you get to discard a white chip (one point) or a black one (ten points). Next thing you know, you find yourself staying in the game in the hopes of getting rid of ten points in one go.

Right from the start you feel that this is a carefully developed albeit unassuming card game. It‘s a game that‘s easy to carry around, quick to explain and pleasant to play. Give lama a try, if you often have friends around, who don’t quite seem to get why you enjoy playing games so much. Here is a small deck of cards that simply works with all kinds of players without intimidating them with weird rules or strange exceptions. There is much to like about lama, even if i would be hard-pressed to be over the moon about it. Still, this game has had a higher success rate in my circles than any other game in my collection.

One thought on “a topical and capital review of LAMA”