Cosmic Encounter is arguably one of the most influential designs in modern board gaming. Its shared victories and rules-breaking species abilities were conceptually and mechanically ground-breaking. More importantly, though, was its unusual tone. You see, Cosmic Encounter is funny. Intentionally so, even. Its humor isn’t situational but hard-wired into the game’s design and follows the basic construction of a joke.

Each turn is build around a rigidly structured encounter, in which players face off against each other. This is set-up.

Then alliances are offered, made or denied which further complicate the encounter’s resolution and make its outcome uncertain. This is build-up.

During the actual encounter, players throw in special abilities, card effects and the like to deliver the punchline. This is pay-off. 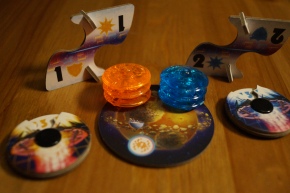 A surprising amount of mental energy can go into a stalemate

If you happen to have a sense of humor about games, this is a frequently hilarious part of playing Cosmic Encounter. The alliances give the game a lightning bolt of unpredictability and that power is placed into the hands of each player. Yet if your group relies too heavily on those alliances, it all devolves into a relentless assault of random interruptions (cf. Munchkin). On the other hand, without the willingness to offer and enter these alliances, most encounters are resolved by a rote “high card wins”.

Enter Cosmic Encounter Duel, a two-player variant that seeks to capture as much of the quintessential Cosmic Encounter experience as is possible to do with only two players at hand. Naturally, alliances do not feature as prominently in this game as in the original. Which means the player-driven disruptions, twists and upsets are gone. Enterprising players who would wield those as bargaining chips to turn Cosmic Encounter into an emergent negotiation game have nothing to cling to here. In its place comes a design that mischievously pulls the rug from under you, like a good Cosmic Encounter player would, in order to get a laugh from the table. You see, Cosmic Encounter Duel is also funny. Intentionally so, even. 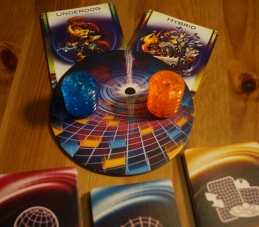 This warp isn’t big enough for the two of us

Although, you might not be able to tell right away considering the byzantine construction of a typical turn. First you need to set your dial to send out ships to a planet. Then you need to pick an offensive or defensive strategy to score the offensive bonus this encounter carries with it. Only then do you get to reveal a card from your hand to resolve the encounter properly. That is, if either side has had any ships left on the planet. Because that encounter might actually be over before you even get to that familiar card play. It can be a funny surprise when it happens when you least expect it, but it’s rather confusing and perplexing when you are just trying to wrap your head around the whole thing. Then there are ambassadors to fight over, i.e. special abilities that can side with one player or another. There are also event cards to resolve that might manipulate your most valuable resource: the cards in your hand, between encounters. That doesn’t even take into account your own unique species ability to turn things sideways.

This game can feel overwhelming, much like earlier incarnations of Cosmic Encounter that had groups regularly devote a lot of their time arguing about timing and interpretation of phrases. Cosmic Encounter Duel has a lot of rules to take in, many to keep in mind and even more to consider on your turn. Make no mistake, this is a gamer’s version of gamer’s game.

This is a very silly player marker

But once you dig in, you will find that Cosmic Encounter Duel creates a pachinko machine of possibilities from one turn to the next. It captures this unique feeling that anything could happen on your turn, while still giving you opportunities for clever plays. As mindlessly chaotic as the game might seem at first, there is a robust structure underneath that opens up Cosmic Encounter Duel to cheeky bluffs and mind games. Far more importantly, though, it also allows for your expectations to be subverted when you least expect it, landing its punchlines for some of the loudest guffaws I’ve had at my gaming table in a long time.

Humor is hard to explain sometimes. Not everyone understands why not getting what you want is funny. Or why trying hard and still failing lets two people bond more strongly than any tensely fought competition can. Cosmic Encounter is beloved because it is an explicitly social game. It brings people together. In its own humorous way, so does Cosmic Encounter Duel. That’s why it earns its place as Cosmic Encounter’s slightly more personal, but no less hilarious, younger sibling.