In “Lawyer Up” two players are trying to win a court case. The game is set in the type of courtroom you might know from your typical TV show or movie. If you’re familiar with Better Call Saul, The Firm or any John Grisham adaptation, you’ll quickly know what you’re in for here.

By presenting witness statements, arguments and evidence (i.e. playing cards) the jurors (i.e. wooden tokens) are to be convinced (i.e. moved in one direction or the other). In the end, the jurors determine the guilt or innocence of the accused (i.e., token majority determines who wins). If you’ve found found this paragraph difficult to read you will likely have a similar experience with this game.

“Lawyer Up” is not an elegant design. It does not elicit the same subtle playfulness that other designs do by painting a multi-layered picture with just a few rule details. The kind of design in which every decision and every consideration reveals an exciting potential for where the game might go next. 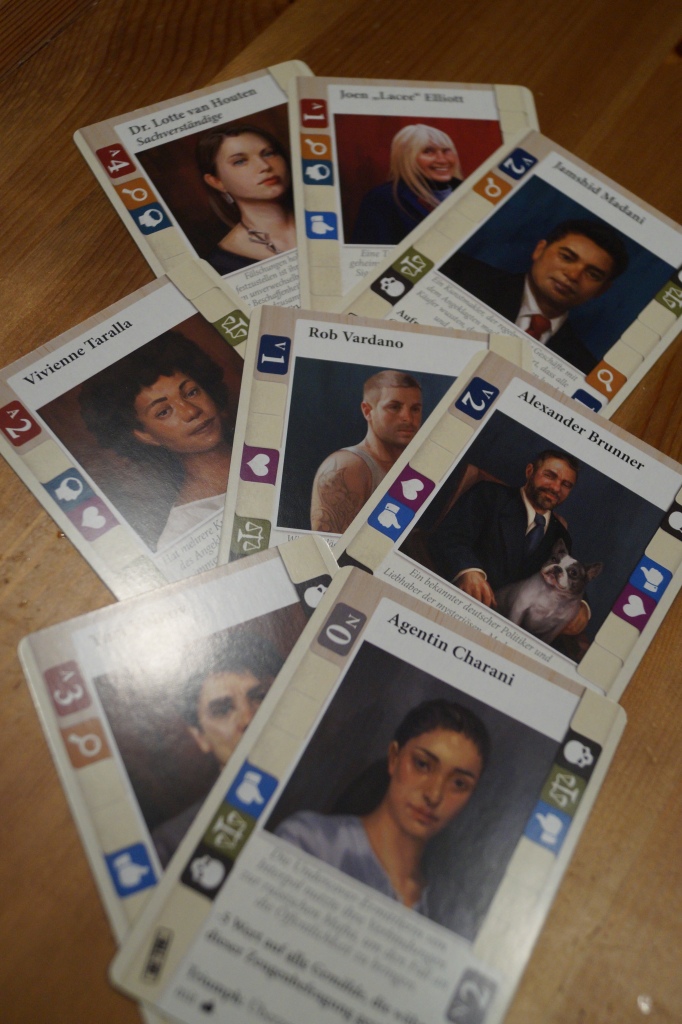 That said, this game still offers exciting and often interesting decisions. But it takes a fairly large chunk of rules to get there. Those rules serve as the scaffolding you first have to climb before you get to where the fun is. You will invoke some quasi-legal tricks (as seen in the courtroom dramas of your choice) to tactically court the favor of the 12 jurors. The player interaction that results is meant to evoke memories and images that are commonly described as “thematic.”

This word then refers to the somewhat obscure quality of games that do not rely on price, rarity, or complexity to impress you. Instead games that we describe as “thematic” aim to engage the often underutilized imagination of their players, so they will picture the actions they take in a game, as opposed to obsess over tactical calculations and strategic considerations. Unfortunately, this is the hurdle that “Lawyer Up” doesn’t quite manage to clear.

A leaner design than “Lawyer Up” would have left room for players to imagine the events of the game. But then, this lack of granularity makes it harder to easily differentiate between individual actions in the game. Before long your mental image of your actions keeps repeating itself, until you learn to shut it off. Because if the rules are too smooth and too easily shuffled back and forth within the game’s fiction, it becomes increasingly difficult to wring some thematic substance out of them.

A lean rules set easily leads to a theme that feels contrived and pasted-on. Playing it feels like you’re trying to read the game board like coffee grounds that are able to give you some deep insight into the many layers and facets of the situation you’re in. It becomes a question of faith not gameplay. A more pronounced set of rules can ground play in something more tangible than vague interpretation.

This is the jury you want to win over

Sadly, “Lawyer Up” doesn’t quite strike the right balance between richly detailed and elegantly playable. The base game comes with two cases, but more can be added by way of expansions. Those do provide ample details. Still the amount of rules overhead shouldn’t be underestimated. You might be able to hold on to the game’s theme, if you can think in the type of scenes, jargon and moments of your typical US courtroom drama. However, if you’re less familiar with those, the game’s tactical card play will likely overwhelm your capacity to draw a mental picture of what’s going on.

Ironically, “Lawyer Up” still manages to expose (rather involuntarily) how trivial truth actually is in a courtroom. Although both lawyers might eventually suspect what really happened in their case, they will continue to influence the trial to the best of their abilities in order to win. Those who point out that this is because “Lawyer Up” is just a game are, of course, correct. Yes, it is just a game. But that’s also a valid way of understanding the kind of wrangling that actual lawyers engage in. A court case is a game in which – as long as they stick to the rules – only their fee is affected. There’s some humor to this, even if it is quite bitter and cynical.

Perhaps this is the actual reason why “Lawyer Up” doesn’t quite land despite its promising concept and great visuals. We remember the kind of courtroom dramas this game is going for, because of their highly dramatic moments. Those often include an angry lawyer (played by Tom Cruise, for example) who think they’re entitled to answers, and want the truth. But that’s not what this game is about. It’s about winning, and that’s why it lacks that spark of passion that makes its theme so exciting in the first place.