Beth Harmon is a very attractive woman. If this strikes you as a disagreeable statement, you will probably find The Queen’s Gambit not very inviting to play. With her piercing gaze, the young lady greets you on almost every part of the game. Apparently Netflix provided the publisher with only a single promotional image, and the graphics department chose to adorn practically every surface of the game with it.

The second thing to jump out at you about the game is the question of why even design a board game to go with a series in which the plot ostensibly revolves around chess. Why play a game to a series about chess and that is not chess? The answer, of course, is that chess in this game to the series, and in the series itself, merely provides a thematic scaffolding to the action. Neither are about chess, they simply use its imagery and ambiance. Just as pretty much every board game makes use of the imagery and ambiance of its theme, instead of dealing with the theme itself.

Therefore, The Queen’s Gambit is not a tactical positioning game that relies on diligent memorization of movement combinations, but a relatively simple programming game. You plot your playing piece’s movement for the next three turns in advance, then move it across the board according to your chosen pattern (taken from chess pieces). The Queen’s Gambit is surprisingly successful in evoking Beth Harmon’s mental visualization of moves, which were CGI in the series itself. Just like her, you play our the various moves in your head and weigh up the options how you want to execute them. As long as follow the move pattern of the card you played (bishop, knight, rook or queen), you are free to move in any direction. 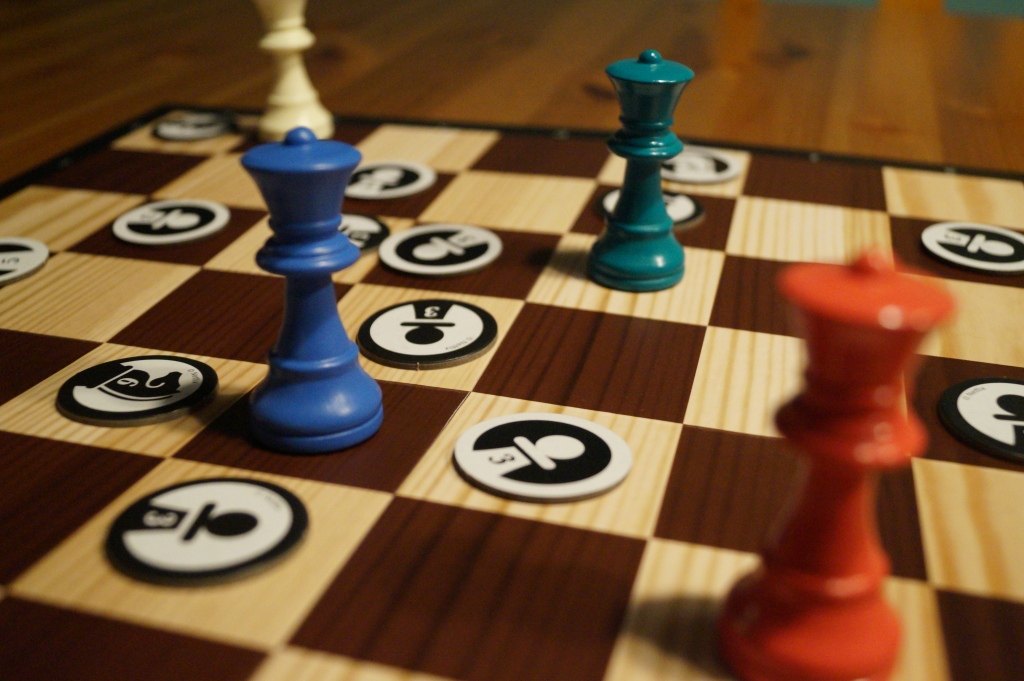 So regardless of how closely Beth Harmon fits your personal beauty standard, your first impression of the game will likely be a good one. The game offers a lot of room and potential to plan ahead. The goal is to collect victory point tiles on the board, and win by scoring the most points.

This is where The Queen’s Gambit reveals an unexpected feature that will leave you either delighted or perplexed. Picking up tiles provides almost no challenge at all. You can hardly play a card at the start of the game without quickly amassing a comfortable number of points. It is only when the board begins to clear up a little, that you need to plan ahead. Even then, the flexibility that each card offers is enough to rarely let you end a move without scoring points. At first the restriction that once you’ve plotted a card you can neither change it nor look at it seems an interesting hurdle. But in practice, the packed board means a wrong move will result in a disadvantage that’s very difficult to pick up on. The end game score might not end up in your favor, but as we all know, the joy of a game lies in playing it, not winning it.

On the other hand, if you are ambitious and determined enough to become the best Beth Harmon at the table, this will not faze you at all. As long as you approach The Queen’s Gambit as a highly ambitious competition between players, your opponents will provide you all the challenge you will ever need. After all what’s more devastating than scoring fewer points than somebody else at the table? 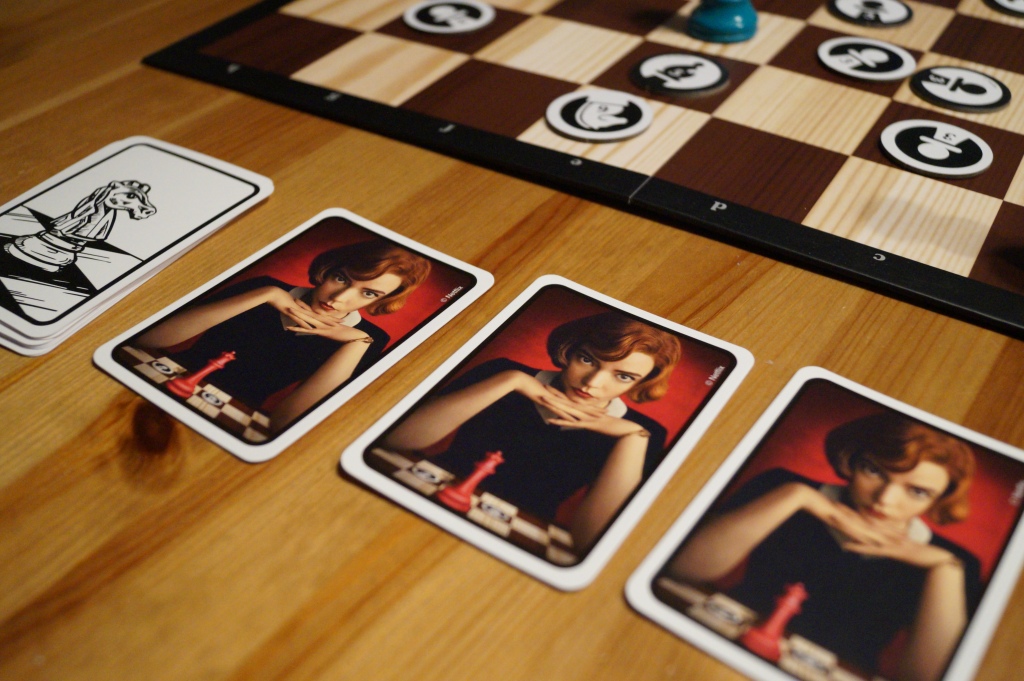 On closer inspection, however, The Queen’s Gambit brings up a question that you rarely ask in competitive games: are there perhaps rules missing here? Because apart from Beth Harmon herself, you can immediately see many different ways the game could be more challenging. You could set and order in how tiles must be collected. Instead of simply adding up points at the end, different token combinations might score differently. Each game color could be subject to special restrictions and so on.

These ideas are certainly neither new nor unusual, but they would give the game that twist that you miss after only a few plays. The design of The Queen’s Gambit provides you with an obviously strong and robust foundation. But it lacks the challenge and thus the appeal to bring it to the table over and over again. This may have been one of the few cases where more is, in fact, more.

*-Beth Harmon is played by Anya Taylor-Joy in The Queen’s Gambit.