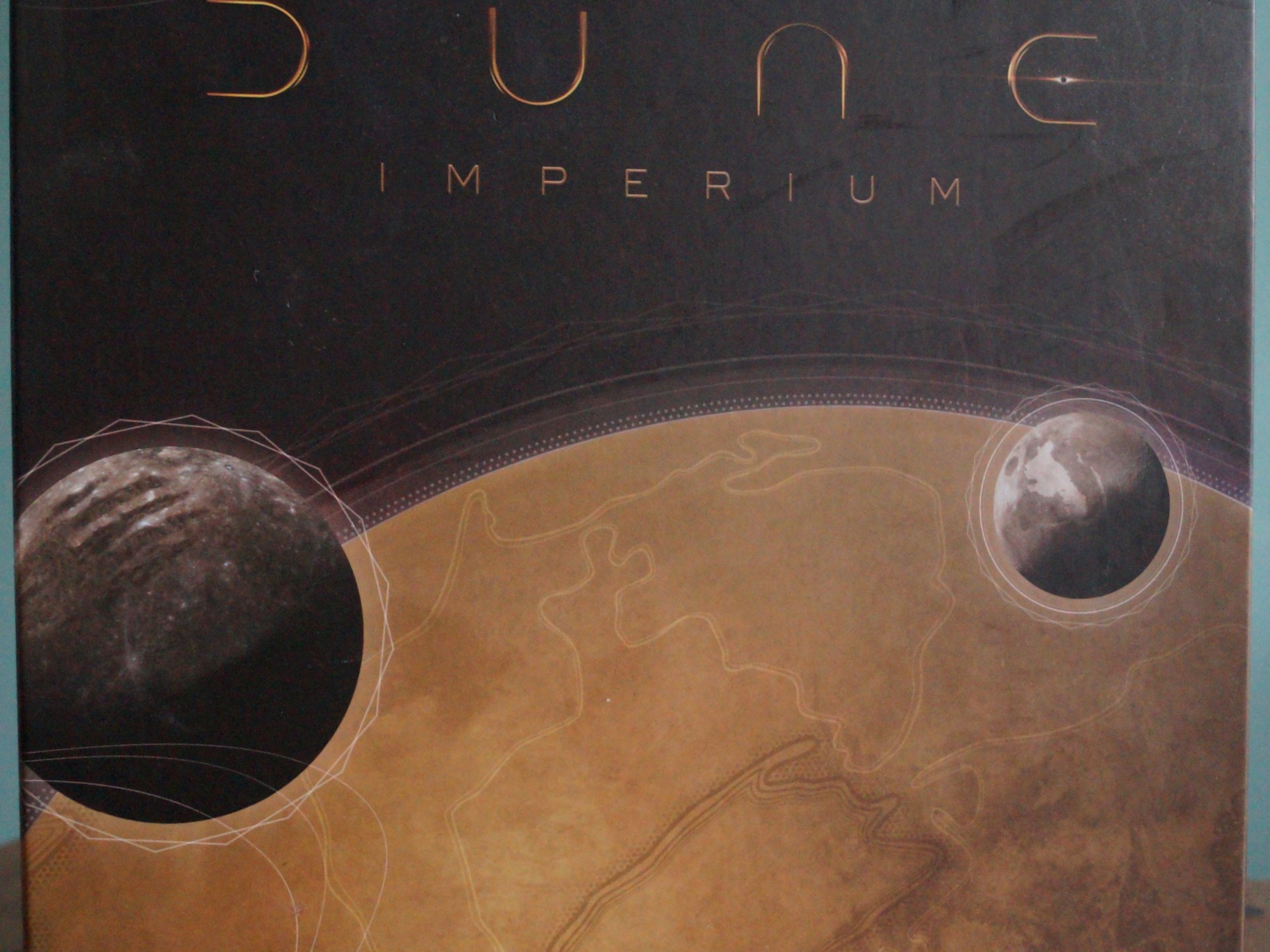 Dune is the story of young Jedi Knight Jean-Luc Picard of the planet Galifrey, who battles the Peacekeeper Mork of the planet Zeist with his sneaker-shaped spaceship “Galactica”. If you managed to read the previous sentence without involuntarily facial twitches, you know as much about science-fiction as I do about Dune. For this review of Dune Imperium, it has the advantage that I can be neither overtly critical or too forgiving. I only know about the novel’s story and the world created for it through what the game reveals to me. And admittedly some vague allusions I’ve picked up in the many years I spent around science-fiction nerds.

In this way, Dune Imperium becomes a fantastic example of how much understanding, knowledge and insight a game can relay about its theme: none. For me, Dune has only grown closer in its particular lingo. Kwisatz Haderach, the Fremen, Paul Atreides, the Bene Gesserit and the Mentat are now words I recognise and immediately associate with game effects. What Dune is, what it’s about and the events of the story itself are still at most dimly (but quite honestly not at all) familiar to me.

For this review, however, that is of little relevance. The game’s effects, tied to these purposefully borrowed terms, add up to a very convincing package. Even if the design’s individual are familiar, Dune Imperium repeatedly makes for delightfully tense experiences. Play is mainly supported by the two halves of playing & collecting cards (“deck building”) and placing your playing pieces on the board (“worker placement”). The cards allow you to place pieces in order to get resources that you need to purchase new options (e.g. better cards or more resources), which you then convert into victory points. When you have 10 of them, the game is won.

If that reads a bit awkward, you’re on the right track. Recognising and understanding how the various elements interlock and are nested in each other, is part of what makes Dune Imperium so entertainingly challenging to play. From the cards and the action spaces on the board, you have to choose those that are useful in the short term, while keeping an eye on the long term. The game requires patience and restraint if you want to win. Some card actions are only available if you hold them in your hand until the end of the current round. At the same time, you want to play these cards to use the action spaces on the board.

Some designs would call this predicament sufficient for a board game, and call it a day. Dune Imperium, however, goes one step further and adds multiple arenas for competition running in tandem. Players fight over resources or progress on a track that promises more victory points. You have to coordinate how to play your cards and player pieces to acquire the means to hold your own against your competitors. But even here, Paul Dennen’s design can’t get enough. Within the two main arenas (military conflict and diplomatic ties) there are further incentives and short-term advantages you don’t want to miss out on. In short, there is something to be won everywhere.

This overabundance of goals, instead of sinking your decisions into a sea of arbitrariness, creates yet more tension. You have to forego short-term advantages in order to pursue long-term goals. This forced restraint puts you under pressure. A sense of pressure that increases as you have to watch your competitors advance their own schemes and plans. It takes a lot of self-discipline to not falter at the wrong moment and rush into battle with everything at your disposal. It’s true, FOMO is one of the emotional hooks this game uses to lure you in.

But Dune Imperium is not just a game of willpower and discipline. It also draws tension from the unpredictability with which some cards can shatter the carefully worked-out balance of the final turns. This adds a sense of high-stakes drama as your hard-won advantage is wiped out by the appearance the wrong card at the wrong time. This may seem unfair, but it is those rare, yet all the more memorable moment that make Dune Imperium stand out.

It is this fear of fate conspiring against you (or the unfathomable plans of other players) that makes each new game of Dune Imperium more exciting and nerve-wracking than the last. When you know what sharp blades are waiting for you in the dark, the cogs in your head turn all the faster. A game in which the right decision at the right time always leads to the “right” (i.e. victorious) outcome has as much drama as filling up the dishwasher. Its emotional high point consists of the pleasant feeling that everything fit in one go. The thrill of playing Dune Imperium is paradoxically found in the way control gradually seems to slip out of your hands over time.

You might end up drawing the wrong cards from your deck, making the urgently needed action space unavailable to you this turn. You will have to improvise, come up with new plans and look for a different way to hold your ground. Maybe a change in turn order has made your carefully laid out plan obsolete and you now have to fin another way to end this round better than when you started it Maybe an unexpected card effect shifts everything around oh so subtly, setting off all your alarm bells at once.

These are the tense moments that make Dune Imperium memorable. This excitement not only shapes how the game feels to play, it still reverberates when it’s been long packed away and rests back on your shelf. The lack of fancy new rules makes this not an ordinary design, but a very impressive one.

I’m unsure if I want to dive into the books or films because of Dune Imperium. The terminology and the illustrations of the cards (“That guy looks like Drax!”), a hair’s breadth away from Uncanny Valley, are not catchy and memorable enough for that. Should I actually read the book, I wouldn’t be surprised if it kept bringing back memories of my games of Dune Imperium.