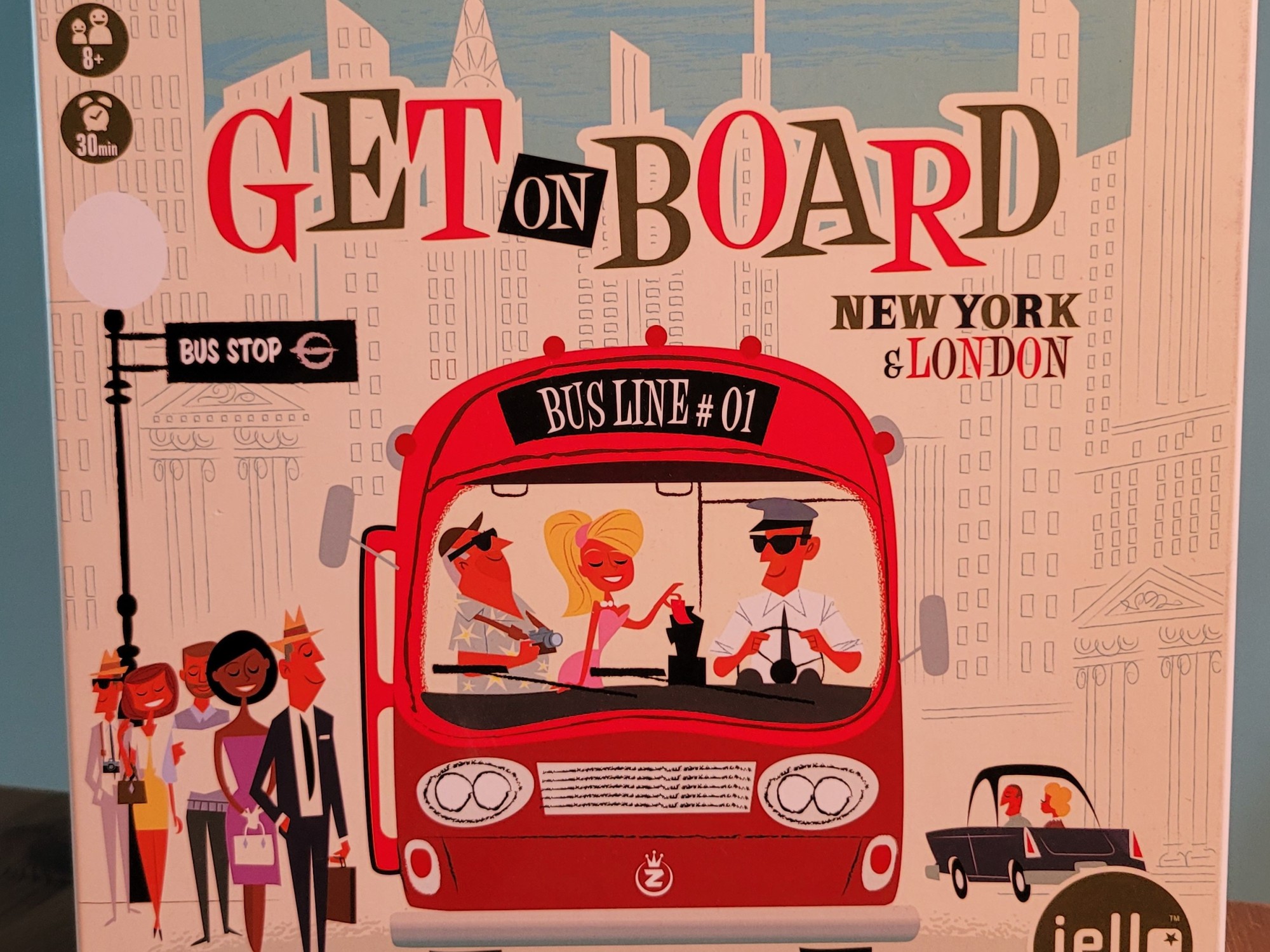 Some people still cling to the belief, that if a game can be sold with two different themes it must be because its theme is interchangeable. As if a game’s thematic quality can be judged by whether another theme would also work with the same set of rules. The fact that I started off my review of Get on Board New York & London like this, should give you an in idea of how much stock I put in this line of thinking.

It all begins with a game by Japanese designer Saashi, first released as “Let’s Make a Bus Route”. Get on Board New York & London is the international version that is now available. One that has been graphically revised and slightly modified in terms of mechanisms. The changes made to the rules are subtle, but not game-changing. Even conspicuous switch from a common, wipeable game board to a street map of a western metropolis, which gets covered with slim wooden sticks, changes the feel of the game only a little. Granted, its tactility has changed, but at least in this Saashi design, touch is not a central element of the experience. Our shared game board served as a means to channel our attention. Whether we write on it, or carefully place our wooden playing piece on it, isn’t a fundamental difference.

The graphical revision that took place, however, or the thematic internationalization (westernization?), has a much larger impact. Instead of laying out a bus route through Kyoto, we are dealing with two more or less known fixtures in the common imagination of the Western game audience: New York and London.

Both are places that are almost larger than life in the imagination of most western players. At least in direct comparison to Kyoto and in some cases even the cities we live in. Our pop culture is heavily infused with images, moods and narratives that take place in these cities. New York, in particular, has countless references from books, movies, and music, and is familiar even to gamers who have never set foot in the United States. Even fictional cities like Gotham City or Metropolis are really just distorted images of New York itself.

The same is true for London. If you haven’t lived in an English city like Liverpool, Birmingham or Manchester these places likely exist in your mind as variations of London. Whether in their outskirts or their narrow downtown streets, our conception of these two cities reaches far beyond the tangible reality of these places and their actual history.

So far London is big enough for the four of us

But Get on Board, as a game, is not interested in mapping the actual bus route network or modeling the trade-offs that their city planners had to deal with. Instead, the choice of these two cities has the effect of appealing directly to our imagination. One might think the change from Kyoto to New York/London is a marketing decision, but then you would have to equally disparage many perhaps even all design decisions that make up a game. From the choice of materials, to the art direction, from the choice of rules, and the decision of how complex or accessible the rules should be. Everything about a game, if you want to be disparaging and spiteful enough, can be traced back to enticing consumers and getting them to buy this.

Fortunately, however, a critique is not an attempt to glean from the game some kind of authorial intent, a commentary, or grandiose statement, as my yiayia used to read from her morningcoffee grounds. It’s much more about looking at what makes the game and shapes its effect on us. In other words, the thematic change of scenery from stylized Kyoto to pop-modern New York/London changes the way we feel about the game.

The visual references we are confronted with on the game board are no longer the same. As we look at the game, we inevitably form connections of meaning between game pieces, bus passengers we picked up, and their destination. We articulate small narrative moments that have a different color and tonality than they do in Let’s Make A Bus Route. We are no longer in a place that only makes sense to people immersed in Japanese culture (or returning from a three week vacation there). To me Kyoto is only the sister city to Tokyo and they both exist only in vague references that other people make to it after having been there.

Instead, we lay out bus routes in New York / London. This is tangible by way of English language movies and TV series. The 60’s pop art style, vaguely reminds me of the animated opening credits of movies from that decade. From “The Pink Panther” to “Vertigo” or “Psycho.” It all has a certain vintage flair, a refuge to a past kept alive by pop culture that everyone reading along here right now was probably too young to witness. Get on Board New York & London is set in a fantasy version of their respective cities, nesting in our minds. A fantasy version that has been waiting for us to finally give it a working bus line network. (Whether there are real places that we don’t recreate as fantasy versions in our heads when we play a game, I leave up to the reader to decide).

Over the course of the game we inevitably place our wooden sticks along the same route as a fellow player. For this we get minus points at the end of the game, because we have contributed to traffic jams and blockages in the city center. Immediately our mind is filled with images of what that might look like. In many films these traffic jams are shown as such an annoyance and burden, that it’s all the more plausible and acceptable that we should be punished with negative points for causing them.

Our score sheets also distinguish between female students, senior citizens, tourists, and men in suits going about their office jobs, all of whom use the bus to get around the city. Playing the game rarely allows us to pay too much attention to them. Get on Board New York & London does not invite us to spin long narratives about the type of people who use public transport. The tourists have no names, just the same camera hanging around their necks. The female students also wear no signs of participating in the cultural and social changes that were present in the U.S. of that time. Behind the hat-wearing office workers, the repressive masculinity culture of the time can at best be assumed, and none of the seniors traveling on the bus, suggest the trauma some 25 years in the past, which is presumably why senior women seem to travel around the city partnerless in their free time. (Whether the lack of LBTQIA+ representation to the era that is referenced here, or to the fact that even a board game in 2022 has its limits when it comes to adequately depicting or suggesting the entire breadth of society, I do not know).

And yet… although the game is not designed for this, nor does it explicitly include storytelling opportunities in the game material, we usually start telling each other anecdotes, snapshots, and vignettes from the everyday life of our bus route when the second half of the game rolls around. A winding journey through the streets that often turns out quite differently than we had actually planned. Narrative, like the lives of cloned giant lizards that insane billionaires breed as a leisure attraction, finds a way.

That way is us. As players, we tell the story of our game ourselves. We are the ones who experience it. We are the ones who choose from the potential of how the game could develop and collapse a number of possibilities into one singular fact. Our narrative takes shape the moment we unload the employee in front of her office building; or pick up the fifth senior citizen to chauffeur her around town and reminisce.

We decide whether that narrative exists only in our heads, or is voiced by us to share with the other players at the table. We stand at the threshold between the game as an optimization puzzle with a flip’n’write feel and an entertaining immersion in an imagined New York or London. A game in which the layout of our bus route is primarily determined by foreseeable, but not influenceable card values. At the same time we now try to get our passengers to the right places in the right order and number.

Going over this narrative threshold is to some extent a question of player personality. Some can’t help but look beyond the convoluted mathematical relationships, at the colorful drawings and the game pieces placed with a satisfying amount of care. For others, the aesthetically pleasing colors and shapes affect them only for a moment before they return to optimizing their points-scoring route. Still others have to rewrite the game experience with the names of the places the bus passes, or even the freely invented names and personalities of the people who board it. From the fuzzy puzzle pieces of half-memory and our own creativity, we put together vivid impressions of places that give us a lot of enjoyment.

New York’s public transit still has some ways to go

The tone is set by players’ creativity and so is the depth of the thematic experience. The game itself, however, offers a appealingly simply entry point to this. At least to those of us who grew up with popular culture that focused on cities like New York or London over and over again.

What unites both the optimizers and the storytellers, however, is the sense that Get on Board New York & London is a game that exudes care and precision. The elements of the game are neither arbitrary nor interchangeable, but deliberately placed and arranged. The cutesy, child-friendly art style of Lets Make A Bus Route (by Takako Takarai) has been replaced by the no less playful drawings and color schemes of Monsieur Z. Both – regardless of personal sense of aesthetics – convey a comforting and friendly armosphere. It’s a mix of tongue-in-cheek playfulness as well as confident graphic craftsmanship.

Perhaps that is the only way Get on Board New York & London can be described: a playful and charming piece of design craft that generates a great deal of enjoyment from its simplicity. It is a soothingly presented gem of a game, but that doesn’t make it any less brilliant.