Through the Desert – When you start writing about games, you eventually need to make a decision if you want to write about what is fun about games, or what is good about them. Sooner or later, you will encounter a game where those two ideas are at odds with one another. This is the case with Through the Desert. It‘s a classic Knizia design from the 90s, that is as polished, clean and straight-forward as the best of his. In terms of

complexity I‘d place somewhere between Ingenious and Tigris & Euphrates. It starts off with simple tile/camel placement and allows for emergent strategies and tactics as the game progresses. The way simplicity in action leads players to discovery of depth is as masterful as anything Knizia has put out. Kingdom Builder is probably its closest equivalent, but it simply takes far too long for the game to reveal itself. By the time you realise that decisions actually have weight, you‘ve long stopped caring. Through the Desert does not have that problem. The only thing it doesn‘t quite succeed in, is being fun. Which is not to say, that I hated my time playing it. But it did leave me oddly unsastisfied and I haven‘t found it particularly easy to figure out why.

The closest I‘ve come to an explanation has to do with how the game‘s timer is a depletion clock. The game ends when one of the piles of camels is empty. This means the game‘s ending is both arbitrary and calculable, which is pretty much the worst of both worlds. The mandatory points rush towards the end is supposed to ramp up tension, but ends up anti-climactic as it‘s only indirectly tied to player actions. The game starts out strong, but ends weakly. I can imagine a few more games of it softening my opinion a little.

Food Chain Magnate – On the other side of the coin, there is Food Chain Magnate. A game that I had a lot of fun playing, but which I would be hard-pressed to call good. This shouldn‘t be read as some kind of binary indictment, as I would strongly oppose to calling it bad. But its strengths and weaknesses kind of balance each other out. If I had to put a quippy comment on it, it‘s that Food Chain Magnate is 100% the sum of its parts. There is no emergent experience to take away from the table, nothing that can‘t be directly tied back to the parts the game is made of.

One part of that: the deck-building style growing of your company, is great fun! Picking employees, training them, including them in your corporate structure to get their abilities and so on… good times! Obviously, in order to give those different employees some distinction and something to do, they need to affect something, which is where the board comes it. With its households, roads, relative distances, marketing, etc. Where deckbuilders usually keep their external value structure simple (Dominion has VP cards, Clank! has you moving a token from A to B and back again), FCM brings in intricate dependencies of demand placement, different layers of effeciency, etc. Also, great fun. As I am typing this I find myself enjoying the idea of plotting out imagined turns with certain employers in my deck. In fact, most of the enjoyment in this game stems from analysing the possibilities open to you, plotting your actions and then seeing them through. And it‘s this last bit, where the game sadly stumbles.

But first another really, really fun thing about Food Chain Magnate: milestones! Triggered by specific actions taken during the game, they award permanent benefits to players who reach them. They are distantly related to objectives in Twilight Imperium. Both drive players‘ strategies, and provide them with necessary orientation in play. But whereas TI lets you roam the galaxy at your own pace, FCM will rescind those milestones in a huff, if you miss the right moment to pick them up. Which is when anyone else does. The problem isn‘t that it can be frustrating to have a milestone removed from the game right before you want to go for it. It‘s that accounting for that means you need to anticipate your opponents‘ moves. In theory this is fantastic. This is what great games are all about: seeing things from a different perspective, understanding others and so on. In practice, though, you are forced to take on a solvable but ridiculously convoluted puzzle. Which employees do my opponents have? Where are their restaurants located? What demands will they stoke? What will they produce? Which milestone will they score this turn? Where are they in turn order? How will any of the affect my turn? What‘s my favourite colour? Don‘t get me wrong, all those questions are great fun to ponder when I sit at the table. But the game isn‘t really much help in providing those answers. They are all over the place. Which is admittedly more of a graphic design / game development issue, but still. What‘s even more damning is that the answers to all those questions are very exact and precise. As the game box proudly boasts: this game is 100% dice-free. There is no fuzziness there. There is no way to abstract the information your dealing with, to make a decision. All of it is very exact and binary. Ignore it at your own peril. 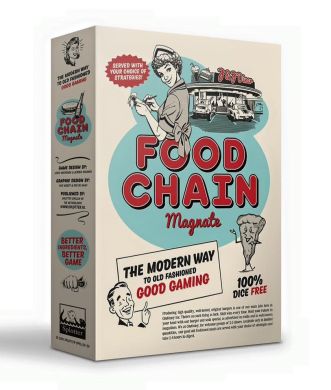 So it‘s a thinky game. Fine. There are lot of thinky games out there. This is just one more of it. Remember the bit I mentioned earlier, how FCM fumbles the execution of your plans? Here is what I mean by this. You make a plan. You execute it successfully. You make money. Everything is awesome. A few turns later, you‘ve expanded your plan. But so have your competitors. And then somebody cuts you off so decisively that your precious plan is effectively defunct now. The rulebook warned you about this. Food Chain Magnate is a cut-throat game. It‘s unforgiving. That sounds badass. Like something only the most grizzled, hardened veteran gamers can weather, while weak noobs pull out their hair in frustration. Haha… noobs! But what „unforgiving“ really means is that the game simply doesn‘t end when it should. Much like relics of game design eras long gone (i.e. the 80s), some players will be slugging it out with each other while the rest of the table waits for something more fulfilling to do. Like in Monopoly. And I can think of little that‘s as damning as being reminded of playing Monopoly.

Every competitive game is built on answering the question „who will win“. As soon as that question is answered a game has to end. But today‘s designers have clued in on the fact, that a game should also end when it has determined a loser. At the very least, it shouldn‘t drag on for a significant amount of time. This is ultimately what hobbles FCM. It is a design that has put a lot of care into the many intricate ways in which decisions echo throughout the following turns, and which asks you to take risks repeatedly. But it also asks you to invest a lot of time in learning its underlying algorithms and cares very little about whether the result is a robust play experience. A game that doesn‘t really care if the group has a good time, as long as each player is challenged… is not one to recommend unreservedly.

The Mind – This game will most likely be compared to The Game a lot. To some extent, this is legitimate, as they are both direct descendants of card game classic 6 Nimmt. One of the most successful iterations of the idea of anticipating other players‘ moves. But whereas The Game suggests decision-making where there isn‘t any, The Mind seems like a complete lack of decisions, when there actually are quite a few. Like a Magic Eye picture that game reveals itself if you play it for a bit, and don‘t try to overthink it. Soon you‘ll find yourself reading your co-players, specifically their body language, facial expressions and reactions whenever a card is played. 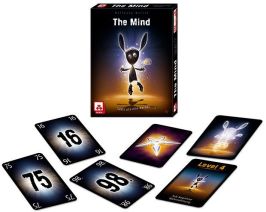 With complex games you spent most of your time exploring the decision spaces that emerge from the interaction of rules and player decisions. Other players are there to fuel that decision space, to open it up and change it from round to round (hopefully), but for the most part their personalities and idiosyncracies only register, when compared and contrasted to other groups. The Mind – with its lack of rules scaffolding – throws all of the decision space back onto the players. You need to figure out when, how and why the others react to cards and what that means. The brilliance of the design is that – for the most part and unlike a great many strategy games – you won‘t consciously ask yourself these questions? They are simply part of the subconscious way of dealing with other people every day. Reading their microexpressions and mirroring them if necessary. Using your own body language to signal if you are waiting, tense, relaxed and so on. We don‘t actively think about these things, we just do them and we see others do them and we respond in kind. The Mind is a brilliant piece of design based on a clever insight into how people interact: non-verbally, but visibly.

As much as I love the whole range of light to deep games in my collection; the component-heavy and the delicately put together…. The Mind almost works in a league of its own. It‘s basically everything I hoped The Resistance could have been, but coming from a completely different angle.