Lest My Opinions Go Unheard

Twilight Struggle – This is one of the games that has a huge reputation, and is highly regarded by a lot of people I know. It used to sit on the top spot of the BGG ranking list for the longest time and now, even I got around to play it.

If you find yourself already already thinking that I need to play this game a few more times to really „get“ it, then I can assure you that this is a very big part of the reason why I think it‘s only ok. Twilight Struggle has aged. Not badly, or well. It has simply aged. In the sense that there are some things that designers today would definitely rework and fine-tune before signing off on it. (At least in the sense that any designer ever feels that a game is truly finished.) Twilight Struggle’s learning curve seems the obvious candidate for that.

The game‘s core rules are pretty straight-forward simple. Play a card from your hand, to use it in one of five different ways. If it „belongs“ to your opponent, they get to activate the text‘s ability. Some cards trigger a scoring round for specific areas on the board. At the end of a turn, you score points according to how many dice roll actions (called military operations) you‘ve made this turn. The game ends if
a) player pushes the victory point balance 20 points in their direction
b) nuclear war is triggered
c) if Europe is controlled by one player during scoring
d) after ten turns.

I‘ve omitted a lot of details that add some variability and unpredictability to parts of the game, but this is the core structure: play cards in order to set yourself up to score VP.

What really makes the game a bear to learn, are the emergent play dynamics that happen over the course of play. The game does very little to help you notice them and account for them during play. You just need to have seen certain moves in play, to realise you need to watch out for them. It‘s a very sink or swim mentality in regards to emergent play, which I doubt most designers or publishers would encourage today. Throughout the game you will have numerous opportunities to score VP during the game, but their timing isn’t fixed. Some scoring cards show up later in the game, some are in the deck right from the start. I‘m a strong proponent of providing all relevant information to players when they sit down to play a game. If you‘re supposed to take individual card effects into account when you play, there should be a way of knowing what those card effects are, when you make your decision. The strategic value of certain spaces or areas on the board should be apparent before your opponent takes or uses them, and not reveal themselves after the fact. In other words, losing a game because of things nobody told you does not make for a particularly rewarding experience.

To be fair Twilight Struggle doesn’t actually keep that information from you, but it doesn’t present it as the cornerstone of your strategic considerations that it is. If you study the card list on the back of the cheat sheet carefully, you can estimate when certain scoring cards will enter play. That said, I really quite like this way of scoring VP in a game, as it gives players both agency and direction. Since you have to play a scoring card during the turn you’ve drawn it, you are immediately given an objective to play towards. But since your opponent might be holding a scoring card too, you need to weigh expanding your own influence with limiting theirs. It‘s an interesting balancing act, that is sadly undercut if you lack the experience to see the bigger picture. The more often you play, the more likely you are to accurately evaluate whether losing a few points during Asia scoring is a big deal or not.

Another thing I noted, and which I assume carries more weight with multiple plays, is that the deck tends to cycle itself out over time. Certain events will trigger repeatedly in irregular intervals, while others happen only once in the game. Events that belong to your opponent are automatically triggered, when you play the card. This means that a large percentage of one-time events will trigger during the eras they are drawn in. But not all of them. This way you end up with a set of events that will eventually occur over the course of the game. It‘s just not a complete, i.e. predictable, set. A workable knowledge of the deck, and the events that you can expect to happen, is of course helpful. Although not in the sense, that you can directly plan for them, but having a general idea of the the things that could happen is enough to give your decisions a more solid foundation. As opposed to being continually surprised by events happening to you. The desire to bring history to life by referencing (and in some sense transforming) historical fact into playable fiction makes it impossible to simplify card events into sets of the same type that can more easily be accounted for when making a decision. Interestingly enough the condensed version of this game, 13 Days, achieves a similar effect by simply cutting down the deck from 100+ cards into 39.

In many ways, I am lucky to have played 13 Days before Twilight Struggle. As I’m not sure that if I hadn’t, I would have been as confident in expecting a solid experience in high-level play in Twilight Struggle a few games down the line. High-level play meaning the kind of tactical and strategic decision making that opens up to you, once you’ve learned the basic set of moves that emerge during the game. When and how to push for control in the Middle-East, for example; how to cut off your opponent from making use of certain cards, or even understanding that an advance in certain areas means that your opponent is either holding the corresponding scoring card or a particular event and how to tell the difference, etc. Once you know enough (not necessarily all) ways in which players move to gain VP, there is room to engage the person you’re playing against and not just the hand of cards they hold.

I am reminded of Dominare, which similarly suffered from needing a few plays to become familiar with the deck, learn how to read other players’ card choices and how to attack and mount a defense in it. It’s a game I quite like, but I find the criticisms of it aren’t too far from the problems that Twilight Struggle has. The latter of course has the great advantage of only needing to rope in one more player to fight your way through the learning curve. 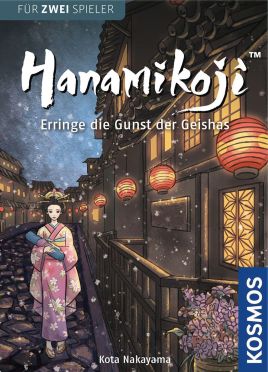 Hanamikoji – As a palette cleanser, this game works like a charm right out of the game. My obsession with East Asian designs and their surprising focus on limiting a player’s decision space, while still allowing for a great deal of forethought and strategy will likely not lessen for a long time. At least as long as I get to keep discovering games that manage to elegantly do so much, with so little. There is just so much to like about this game. It’s a two player card game, in which you try to gain majority among seven geishas, by playing cards to them. You win by getting four geishas on your side, or by gaining the favour of enough geishas that their combined influence adds up to 11 or more. In a clever combination of graphic and game design the influence of each geisha corresponds to the number of cards there are in the deck. Those range from 2 to 5. It such a neat and elegant way to communicate information you need to make a strategically sound decision. I also like the four actions you take, each of them once per turn. By having a limited set of information open to you, every decision your opponent makes tells you something about their hand. Which in turn helps inform your decision. Which 2 cards are you going to bury? Which card will you save for a late reveal? Which offer of cards is the least helpful to your opponent. It’s an amazing little game. Incredibly quick to play, easy to get into and a fantastic end to a two-player game day.

Ganz Schön Clever – I‘ve played GSC a surprising amount since I‘ve got it. And I‘m not 100% sure it‘s because I like it that much, but because it‘s easy to set-up, easy to play and (thanks to its nomination) of some interest to the people I game with. So getting it played in all player counts (1 to 4) was quite easy to pull off. Nobody disliked the game. Nobody loved it either, but it wasn‘t rejected by anyone I‘ve played it with. But, regardless of experience in the hobby, none of the people I played it with, were clamouring to go again. If I were to suggest it at our next game night, they won‘t object. Or the one after that. Or even the one after that. The enjoyment of the game doesn‘t sneak up on you. It‘s not the kind of game that you find yourself thinking about later, realising that you‘ve actually had more fun playing it than you realised. It‘s just well done. It drags with 4 players, since you simply don‘t have enough things to mull over in the time it takes for you to take your next turn. Even 3 players is kind of pushing it, but for the most part it moves along fairly quickly. I‘ve found 2 players the most enjoyable way to play this game, keeping me interested in most dice rolls made. Solo play is effectively the same, just a little less social. For obvious reasons. Note to self: look into playing GSC in front of a mirror.

GSC is solid, robust and easy to play, without feeling dull. That is a exactly what I expect from a game that was designed and developed properly. The individual dice all belong to different scoring mechanisms, all of which trigger certain effects if you‘ve scored those colours often enough. Chaining effects is great and feels like an accomplishment or at the very least a pleasantly serendipitous surprise. The game is a collection of seemingly small and not too impressive rules, which end up creating an unexpectedly reliable experience.

The smartest thing about GSC‘s design is the rule that says that you must put aside all dice of lower value than the one you choose to apply to your sheet. Not only do you miss out on scoring certain colours on your turn, other players get to pick one of your unscored dice after you‘ve taken your turn. The competitively minded players will have another reason to go for the low-numbered dice first.

This simple tweak structures your turns at the beginning of the game. You want to keep your options open, so you will gravitate towards lower numbered dice, which in turn leads to heightened tension towards the end of the game, when you must rely on high-rolling dice to fill up the spots you need. Instead of feeling repetitive, the game seems to throw new requirements at you with each roll of the dice. It‘s a subtle change, that gives the game an arc, without bluntly introducing new rules half-way through.

Ganz Schön Clever is a decent game. I‘m happy to own it, although I highly doubt I will rush out to get new scoring sheets, once my block runs out. But I guess there are worse things than a game with an expiration date.