Well… that’ was quite a bit of gaming in a reasonably short amount of time. I started writing this on the train back home after 5 days in Essen. And, much as could be expected, I got to play some games! In fact, there were so many of them… that I will have to split it up into two… possibly even three posts. I know, I’m as flummoxed as you are.

Harvest Dice – I started off my Spiel adventure slow and quite relaxed, strolling through the halls as the booths were being set up. Saying hello to people I recognised. I even picked up a copy of Symphony No. 9 – even though publishers aren’t supposed to start selling games until the fair opens properly on Thursday. That’s arguably the reason why Kuro’s Halloween Party was sold out when the first visitors came in. I didn’t actually get to play anything until I went to my friends’ place where I have the great honour of staying every year. 🙂 I spotted Harvest Dice on their shelf, and having heard some praise about it, I suggested it. Because you never know if and how often you will actually get to play games with the people you’re going to the fair with. To be honest, the roll & write enthusiasm hasn’t really grabbed me, the way it seems to have grabbed a lot of people online. I don’t think they are bad, or too light or anything like that. But I was mostly indifferent about most of the entries. They were a perfectly fine way to pass the time, but nothing I would feel particularly eager to play if it was suggested. I think that’s because, for the most part, these games have a very strong puzzle element to it at the expense of other aspects that board games can offer. The continually shrinking array of options before you as the game winds down can feel random and unfair at first. But as you play those games a few times, you realise that there are smart tactical choices that help you avoid certain pitfalls. It can feel very rewarding to learn and improve from play to play. It’s not entirely unlike the gratifying experience of “getting a handle” on a mid-weight engine building board game. As you play, you discover new ways to deal with challenges that the game throws at you. Experimenting, learning and pursuing mastery of the system is a reward cycle that a lot of people tend to respond well to.

Unfortunately, I don’t really care. Or rather, getting better at a game like Harvest Dice, doesn’t feel gratifying enough to me, to make me want to return to the game over and over again. It’s an experience that quickly becomes repetitive to me, and my motivation to keep playing tends to suffer enormously with those games.

All that said, I’ve found the way that elements of the design interlock in Harvest Dice a smidge more engaging than in a game like Ganz Schön Clever. So given the choice between those two,I’d go for cabbage, carrot and tomato every time. I’m not sure if this may be a glowing endorsement coming for me, or a reiteration of my sense of vague indifference towards the genre.

Tour Operator – This was the first game of my Spiel visit proper. It caught my eye because of its background. I find myself appreciating the non-fantastical and non-historical backgrounds of new releases quite a bit more these days. In Tour Operator you are running a travel agency and try to get tourists to a destination of their liking, in order to score points. I really liked the artwork, with all tourist art being unique and depicting a realistic range of body types, ages and personalities, albeit with a notable European emphasis. It ultimately didn’t find its way back home to me, because while the overall design was quite solid, it also felt as if the various elements were distinct rules concepts stapled together through sheer force of will. In practice this meant that I found myself switching mental gears a lot from one phase of a turn to the next. Dice generate resources, employees create a pool of special abilities and one-off benefits, VP multipliers come in the shape of a map that uses up spots each time you score them. There is nothing wrong with any of those elements. At most the clean-up phase at the end of each turn requires a few too many tokens to move and/or place, but that’s not much of a criticism. Tour Operator’s only flaw is that it feels as if it never becomes a cohesive whole.  The game is inviting, interesting and enjoyable. But in this year’s deluge of releases a game like Tour Operator may just lack the little magic touch to make it stand out. It’s a shame, really. A few years ago, this game might have acquired a bit of a following after the fair.

You see what I did here.

Nyctophobia – Along with some fellow German bloggers we made our way to the Asmodee press playtest hall, where a number of Asmodee’s new releases could be played in peace and quiet with little to no queing. The first game we tried, was the eye-catching (some pun intended) Nyctophobia. A one vs many game in which a deranged killer (or witch in the alternate set which we didn’t play with) tries to hunt down some campers in the woods before they make their way to their car. The catch (!) being that none of the hunted can see the board, having to rely solely on their sense of touch and what they tell each other about the board’s layout. Much like in When I Dream before it, having one of your primary senses taken from you, leaves you in a vulnerable mindset, which definitely heightens the experience. And it’s ultimately the experience that this game will be remembered for. The rules framework that is supposed to focus, guide or otherwise structure gameplay only does the bare minimum: it provides a goal, it places some obstacles in your path and gives the hunter a few restrictions to put the two teams on vaguely equal footing. You are encouraged to heighten the experience by, as my cards instructed me, taunting specific players before taking your turn. And while I generally enjoy games that intentionally set out to affect the social interaction between players, I’ve found Nyctophobia too pared down to give me something to hang my interaction with other players on. I think that the game will live or die based on whether the group has a strong affinity to the horror subgenre that it references. If the stylings of games like Last Friday are to your liking, you will seek out a second, third or even 13th game of Nyctophobia. 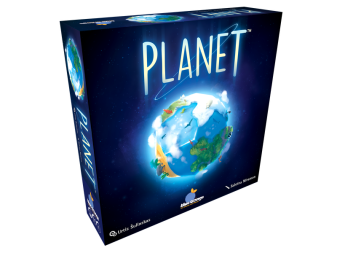 Planet – Next up was some lighter fare with Blue Orange’s Planet. A fairly large dodecahedron (also known as 1D12) featuring a magnet on each side has to be turned into an eponymous planet, by placing magnetic tiles on it. Those tiles are drafted by you and the other players as you compete to attract wildlife to your planet, by providing it with the largest natural habitat for it to occupy. The appeal is deceptively simple: you get to play with magnets. No matter how old you are, I dare you not to enjoy the satisfying pull and following clink sound when you manage to place a five-sided tile on your plastic die. It has brought a smile – some of which were hidden, some were not – to everyone at the table. It doesn’t really get talked about as much, but it’s the sign of a good game designer to understand that the core action you have to perform over and over and over again in a game, must be satisfying or at least pleasant in some way. And making magnets do their thing qualifies easily. To a certain extent I have some respect for a designer/developer making the decision of paring down a game until it is as lean as it can be and as bulky as it must. I am not entirely sure, if Planet straddles that line, though. Starting in round 2, you are given objectives to achieve. Complete the biggest ice area without bordering on a desert. Or offer the most wooden areas, that do not border on mountains, etc. It is a way to guide your decisions when it comes to drafting tiles for your planet. Which tile matters to you? It is probably the one that will help you score the animal card this turn, or next, or even two or three from now. But as your planet fills up, you can’t avoid failing certain requirements. Echoes of roll & write games, with their ever decreasing range of viable options what to do next, seemed to have lowered my enthusiasm for the game as we played. Some bloggers at the table fell in love with this game. I merely managed to nod and smile.

The game was sadly not inspired by her

The River – Days of Wonder’s big release this year at Spiel was simply called The River. It’s the kind of game where you find yourself struggling to forget everything you know about its genre in the vain hopes of providing a fair take on the game. I couldn’t. I know worker placement games. I have played worker placement games. This is a worker placement game. There is little more to say about this. Literally. Going into details about rules or artwork is really just a way to pump up the word count. If you are unfamiliar with this type of game, The River seems a pretty decent, family friendly introduction to its dynamics and challenges. If you don’t have such a game in your collection, The River is a good current release to put on your shelf and enjoy when it’s played. It’s not dull. It’s not boring. But the only thing that keeps it from being completely interchangeable with any other game on the market, is that it came out this week.

That’s it for part 1. Next time I’ll talk about Just One, Four Big Strata, Mini WWII, First Contact, Arkham Horror 3rd edition… and who knows what else!