Games are fun. Which is only fitting, considering that that‘s why we buy them. What may be a little unusual, though, is that most of them don‘t really do humor. Which isn‘t that much of a surprise, considering that the renaissance of board games back in the 90s started in a country generally not known for its sense of humor. Sure, there‘s laughter at the table. Experiencing a good game together tends to be a friendly and joyful affair. And yes, play tends to evoke a warm and fuzzy feeling in us. But it‘s usually our social skills that get us there.

But when it comes to the games themselves, gamers tend to take their hobby pretty seriously. You can tell by the criteria we apply to games. Are they balanced? Is the rulebook comprehensive or does it rely on players to figure things out? Will the better player be justly crowned winner at the end? 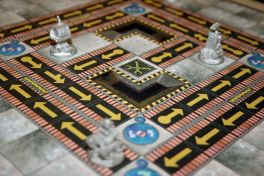 The impish and anarchic joys of Robo Rally

None of these questions leave much room for humor. Which also shouldn‘t be much of a surprise. Board games are generally rooted in the idea of fierce competition, which doesn‘t really gel with the anarchic spirit of humor.

It‘s due to our socialization as gamers, that we are able to laugh while we sit at the gaming table without slipping into schadenfreude and malicious gloating. We simply learn to endure this contradiction of competition and humor, so as not to come across as a sore loser or, even worse, a graceless winner.

Luckily, there are some games that defy this edict of the noble struggle for supremacy. Games, that see our burning desire to win and our willingness to put as much mental effort as we can muster into achieving that goal; only to thumb their nose at us. They are games that do not try to be fun by way of teasing a hard-won battle out of the players. In some hardcore circle this brings up accusations of being more of an activity than a game, or not a proper game. But why would you ever want to listen to those people?

The truth is, that board games and humor are very good at one thing: bringing people closer together. In what is arguably the most popular cultural art-form of our times, storytelling, humor is often used for a very specific, narrative purpose. It‘s employed to imbue a collection of disparate character traits with a sense of humanity, and thereby make us believe in them. It‘s the self-deprecating comment, that makes us like a character. Their vulnerability, that we recognise as our own, makes us take their side. It‘s the collection of small, mundane setbacks that makes us say „yes, I know exactly what that feels like“.

A game‘s humor has basically the same function. Although, it‘s important to separate humor from just jokes. A game like Munchkin or Clang in Space may be filled with references and spoofs. But that by itself, does not bring out our humanity. A somewhat obscure pop reference that only one player at the table picks up on, doesn‘t create a closer-knit group of people. It probably does the opposite. Even the rulebooks written with a wink and a smile, like Dungeon Petz or Galaxy Trucker, really only delight the game‘s owner. How often does everyone at the table actually sit down to read a game‘s manual? But humor is what happens in play. It‘s not the stuff that‘s on the table.

In a game, much like in other aspects of everyday life, humor is about the sudden subversion of expectations. It‘s the surprising twist, that firmly pulls us back down to earth. No, you‘re not the leader of some alien species colonizing outer space. No, you‘re not some chivalrous hero out to steal a dragon‘s gold. You‘re not even a courageous protagonist, trying to survive a horror flick. Humor is when a game breaks our immersion on purpose. Not to cheapen our victory, or to downplay the sting of losing. But to show us, that we are in fact 2-5 friends sitting together, enjoying each other‘s company. We‘re not rivals. Not opponents. Not even comrades-in-arms. It‘s a reminder that gaming is about submitting ourselves to the whimsical nature of play. 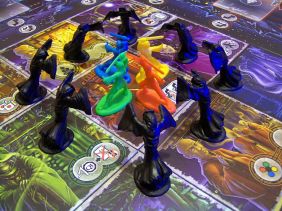 We remember it as the moments, when the table erupts in full-throated laughter. When our carefully laid plans are utterly demolished by random chance and everyone at the table knows exactly what that feels like. It‘s when a card in Mountains of Madness makes us act like a complete fool, for no benefit whatsoever. It‘s when the challenge before us is so massive, that we are simply overwhelmed by it… but still go to face Wu Feng.

Humor is embracing that little bit of anarchy in our lives. So when we play those games, that actually have a sense of humor, it feels like we‘re sharing our humanity a little. These games remind us of our similarities, even as we lose ourselves in our desire to be the best. They let us sympathise with others going through moments and emotions we know too well ourselves. Humor is the tool that shows us how little our physical and biographical differences really matter. That‘s what turns a fun game into a great one.

So, which game does humor best for you?

One thought on “The Secret Ingredient of a Great Game”