Why do we play board games anyway? If you were to ask 5 people this question, chances are you’d get 12 different answers. But despite that, you can generally divide them into two big groups. One of which, you may call the idealistic and esoteric replies. We play games to spend time with other people. We play because it’s culture. We play because it lets us connect with other people, and tap into our shared humanity. All of those replies are perfectly reasonable. Although depending on the context in which they’re given, they may come across as overtly pretentious or pompous.

The other camp might be called trivial replies. We play board games to have fun. We play to win, or we play for nothing at all, because games and play are meaningless in comparison to more serious matters. Admittedly, there may be situations in which those replies are valid, but I think if you’re so eager to undersell your hobby, you have to ask yourself why you haven’t outgrown it yet.

And then there may be a third group, lingering at the margins and easily overlooked, which is probably the most interesting of them all. It’s the one probably best described as pragmatic and yet often ignored. They are the replies we rarely put into words, and simply assume to be true whenever we sit down to play.

Most modern rulebooks feature a paragraph titled “Goal of the Game” somewhere early in its pages. In it you are likely to find such incisive and instructive descriptions such as: gether the most victory points, be the first to empty your hand of cards and so on.

Obviously, the goal of the game isn’t the same as the reason we play that game. If the goal were the same as the reason, the Lord of the Rings would be about recycling a lost piece of jewelry. Math exams would exist for the sole purpose of students collecting points. And you would only take a walk in the park, so that you can arrive at your home again. In other words, treating the goal for an activity, as the reason for engaging in it, is a silly way to look at it. 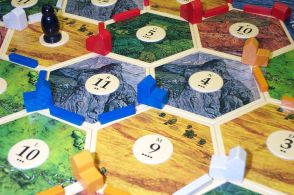 Klaus Teuber’s Catan is a classic because it’s about victory points, see?

So, that obviously goes double for board games. From a designer’s point of view, the afore-mentioned goal of the game is the justification players need to engage with the game’s design. The 10 points you try to reach in Catan motivate us to expand our settlement. They are the reason we seek to trade with other players and why we are annoyed when the the robber is placed next to us. But those are merely the framework within which our play can develop depth, momentum and sometimes even a life of its own.

Roland Barthes already made the argument, when he proclaimed that the author is, actually, dead. Talking about literature, he argued that the author of a text is neither the highest nor only authority as to what that text is about. Board games are a blatant manifestation of that very argument. Different gaming groups can arrive at fundamentally different experiences with the same game.

Some groups double down on the competitive element, fighting over every single victory point, grabbing every advantage they can and looking for shrewd ways to apply the game’s rules to play. Others prefer the act of play itself, facing the challenges and puzzles of the game by themselves. Yet others consider the game an activity that merely complements our social interaction, but has little to no effect on the overall mood of the evening. There is a wide and colorful spectrum of player behavior that a game can give rise to.

The author or designer has quite a bit less influence here than many might think. It’s the players themselves that come together to determine the kind of play experience they will participate in. What’s fascinating about this, is that this rarely seems to happen due to exhaustive pre-game conversations. Nobody sits down to explain in detail just how competitive or laid back they want to play. Nobody comes up with explicit guidelines about what kind of player behavior is appropriate and which kind of action might spoil the mood.

This is not because there is some kind of general gamer consensus about those questions. There is no dominant gamer culture that sets those boundaries for us. Not even a rulebook can do this. Considering how most rulebooks already struggle to explain how to use the game’s components in a way that is both comprehensive and comprehensible, this shouldn’t come as a surprise.

It’s the players themselves who are key here. They are the ones to establish boundaries for their group, explore them and occasionally test them. If they fail at this task, you end up with some resentment, completely independent of any questions of winning or losing the current game. What may have started as a misunderstanding, can quickly escalate into being frustrated at a player or – in particularly thorny cases – turn into a passive-aggressive tit-for-tat which casts a shadow over the entire experience.

The reason we play board games is determined by the players, and not the rulebook. The biggest source of conflict, in the games I’ve played with a wide range of players, hasn’t been a difference in approaches, convictions or even preferences. Let’s be honest, most games are short enough that we can put aside our personal likes and preferences for a moment for the sake of our group’s activity.

The actual problem lies, as it so often does, with players’ soft skills. It’s their ability to negotiate their individual needs with those of the group. The more capable individual players are in this regard, the easier it will be for the group to arrive at a solid foundation for play. A shared purpose of play that the rest of the table can both accept and is comfortable with, all without having to have “the talk” before-hand.

It’s important to remind ourselves of just how much influence player wield over what play will be about and to be aware of what it is we actually want out of a game.

It’s worth asking why we play, and how that purpose is best fulfilled by the game we’ve put on the table.