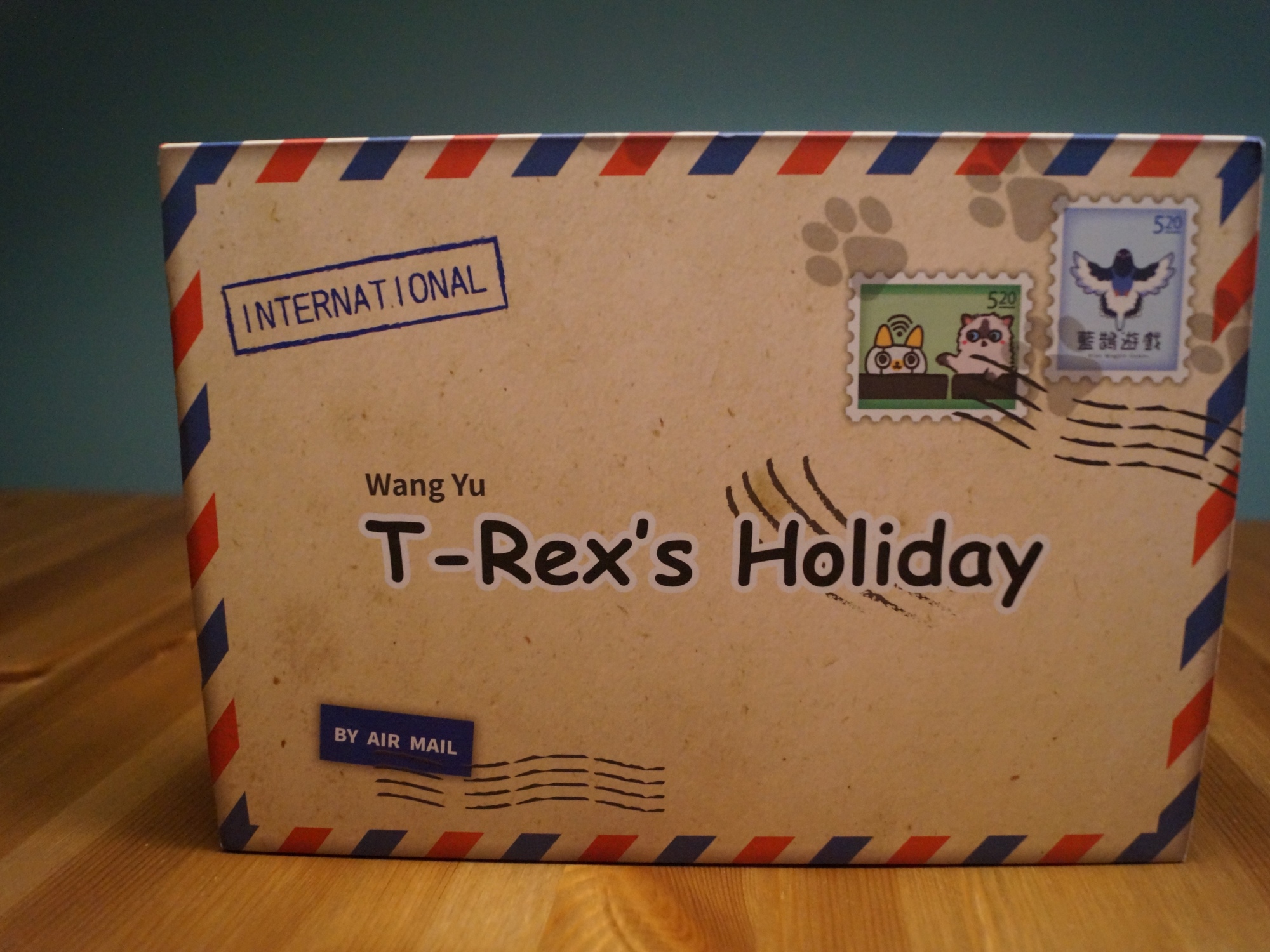 The name most likely gives it away already, but T-Rex’s Holiday (or Tyrannosaurus’ Holiday as it is fully called) is a roll’n’write game about herding cats. Or at the very least keeping them busy and entertained with toys and biscuits. It doesn’t stray too far from its genre’s blueprint giving you about a 100 or so colored sheets of paper on which you can record your dice roll results. It also comes with three transparent dice with cat stickers on them ranging from 1 to 6. It’s not the most groundbreaking of components, but then again, it doesn’t need to be.

Where it slightly steps off the well-trodden path of roll’n’writes before it, is in how the dice are rolled and entered into the spaces on your sheet. First of all, the active player (yes there is a turn order and it’s not just for show) rolls the dice in secret. They reveal two of them to the table. Those two results can be entered anywhere on the sheet, with some limitations, and where the result may help you score the most points at the end of the game. But it’s the third die, that’s only revealed after everyone has finished scribbling, that adds a cute twist. Because with the third, T-Rex die, the number determines in which area of your sheet you may enter it.

What starts off as a minor inconvenience at first, quickly becomes a victory point depleting nuisance. Suddenly you have to close off entire rows you’d hoped to score big points with. Your dreams of a big score may be dashed by T-Rex (the titular cat) prouncing on your sheet and messing up your carefully laid plans.

This has two noteworthy effects on the play experience. One is fairly familiar from other entries in the genre. An inconvenient die result forces an agonizing decision on you. Which scoring opportunity to give up and which save into the next round. Will you take a risk or play it safe? It’s really no different from pretty much every other roll’n’write game out there. If you like it there, you’ll find it just as entertaining here.

But what makes T-Rex’ Holiday worth mentioning at all, is the second effect that holding back a die and revealing it to the other players brings with it. Instead of the game feeling like a solitaire dice diversion, the active player’s reveal is poised to provoke an immediate emotional response from players. Not unlike many take-that games that let you revel in schadenfreude by messing with your fellow players, T-Rex’s reveal adds a little bit of substance to the experience. Something that the roll’n’write genre generally has a hard time with. Scribbling away on your sheet on your own, makes these games feel flimsy and disposable. Like a nerdy version of solving a Sudoku while sitting in a bus.

Which is not to say that T-Rex’s Holiday somehow manages to escape the long shadow of triviality that holds back the genre. It’s still only a fun little puzzle to solve, but one that feels like being played together and not just in parallel.

Wang Yu’s restraint is evident in their design which doesn’t overburden players with wacky special abilities or combo options, like some entries have done in an attempt to feel less disposable. It’s still possible to pull off a clever play through the use of biscuits (which can help you fix previously devalued scoring options). But for the most part it’s a straight-forward game, even if some parts of the rulebook are a little more difficult to wrap your head around at first.

The biggest stumbling block tends to be figuring out when certain numbers may be written into an area, when they must be and when that can’t be. Once you’ve taken that hurdle, though, Tyrannosaurus’ Holiday reveals itself to be a charming little game. One that has every right to be mentioned alongside abstracts like the convoluted Ganz Schön Clever, the relentless Welcome To… or the goofy Calavera.

Its fast play time and easy to engage with mechanics are a solid, albeit not ground-breaking alternative in the by now well-populated roll‘n‘write field.