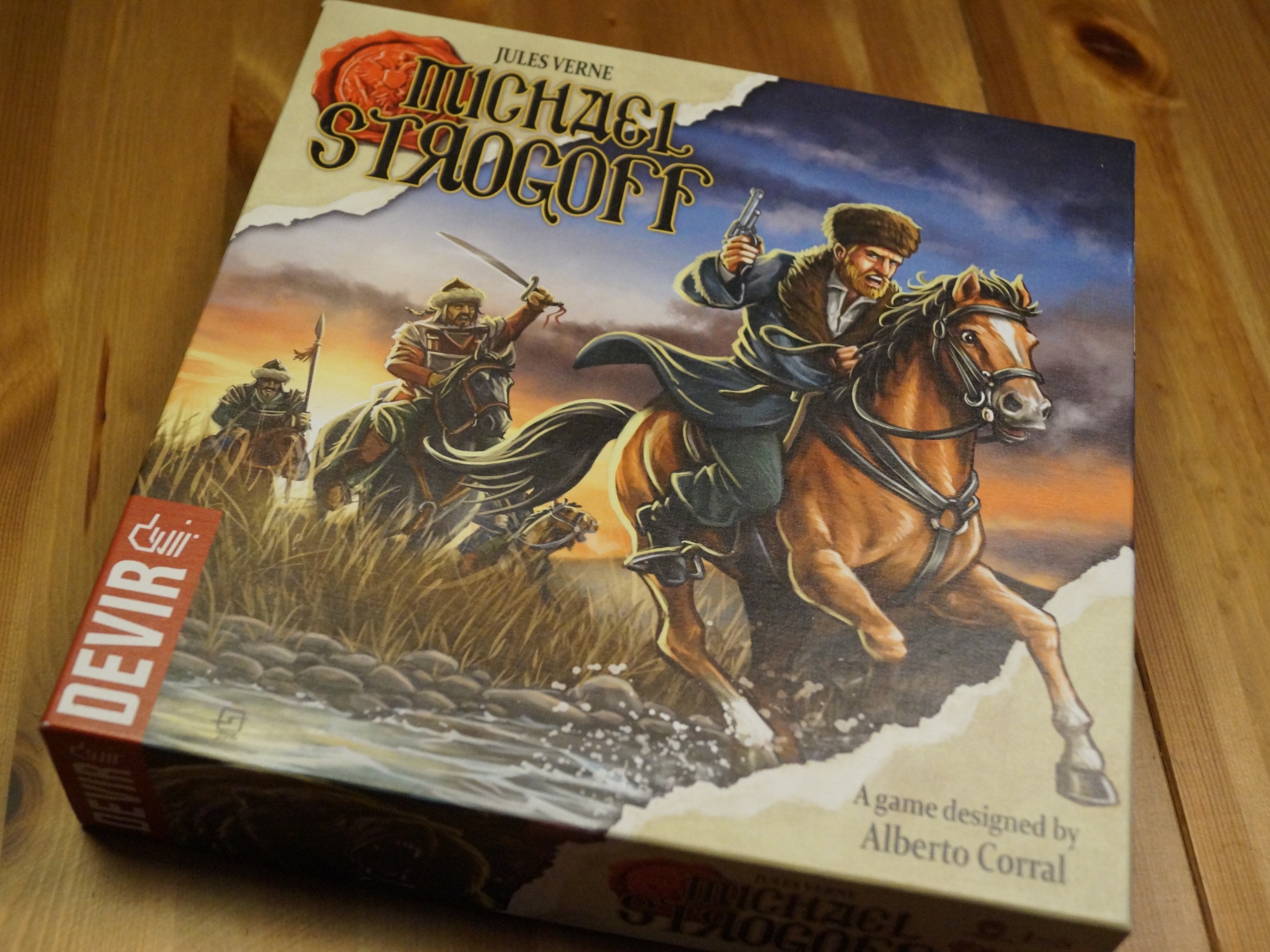 Michael Strogoff (designed by Alberto Corral, published by Devir in 2017) was sadly buried under the avalanche of new releases at Spiel 2017. Lacking a strong gimmick or extravagant art design, it‘s not always easy to find a vocal target audience that will promote your title once the fair is over.

Worse than that even, it commits one of the cardinal sins in the quick and often superficial judgement of modern gamers: there is absolutely no mechanical interaction between players. With heavier games it‘s easy to overlook such an omission, or to claim that taking a resource another player wants qualifies as „indirect“ interaction. But Michael Strogoff doesn‘t even bother to suggest any such thing. This is a straight-up race to the finish line and not some kind of intricate juggling of mechanisms for a strategic victory point advantage.

You may be familiar with Jules Vernes’ book of the same name. I certainly was not but found it to be a rollicking fun adventure, in which the heroic, eponymous courier travels through the Russian Tundra to stop an assassination attempt on the Czar’s brother and thereby thwart a political coup. The amusingly pulpy plot of the original, incl. the Leidenfrost effect, has been transported fairly truthfully into the game. Albeit while taking fewer liberties with the story’s chronology than say, War of the Ring does.

That’s in part because Michael Strogoff is noticeably smaller in scope. Instead of taking the reigns on a war epic, you’re in a desperate race against time, or rather the traitor Ivan Ogareff and his unstoppable journey to Irkutsk. You will have to catch up to him there and face him in a duel to win the game. Instead of working together, you will seek to earn fame and fortune by keeping Russia from falling into chaos. What appears to be a somewhat clunky design decision at first, reveals itself to be key to understanding the game and its lack of player interaction.

Because the game’s action doesn’t really take place on the board but above it. It’s not the mechanisms that create a push and pull to entice players, but it’s your friends across the table who do. Or rather their competitive streak. Designer Alberto Corral simply assumes that players consider outdoing their friends of utmost importance in a game. Only if you recognise that slight tugging at your ego, when an opponent overtakes you, will you fully grasp and enjoy Michael Strogoff.

Every advancement on the track adds another hazard card to your journey. Once your array of cards features two matching symbols, you will have to stop and spend precious turns recouperating from the collected setback the cards have wrought. All while your fellow players gleefully pass you by.

Michael Strogoff asks you to balance your gaming ambition with tactical restraint. In a weird way it’s vaguely reminiscent of the first Spiel des Jahres winner: Hare & Tortoise. With the biggest difference being that moments of high tension are infused with the occasional dice roll or the draw from an unpredictable card deck. It also helps that the book’s story is used to illustrate the race by dividing the track into chapters.

At the end of the game Michael Strogoff shows why it’s worth talking about at all. Victory and defeat is rarely attributed to superior tactics or clever strategies, even if both matter to some extent. It’s also more than just simply blaming unlucky dice rolls. Instead you will find yourself cursing the moments when you played too timidly to stay ahead. While the winner will boast of taking a risk at just the right moment to leave everybody else behind.

In its own funny way Michael Strogoff is about the same courage of a real hero, that Jules Verne invokes when describing his protagonist. Only this time you’re sitting at a table and hope that you’ll draw the right card when it’s your turn.