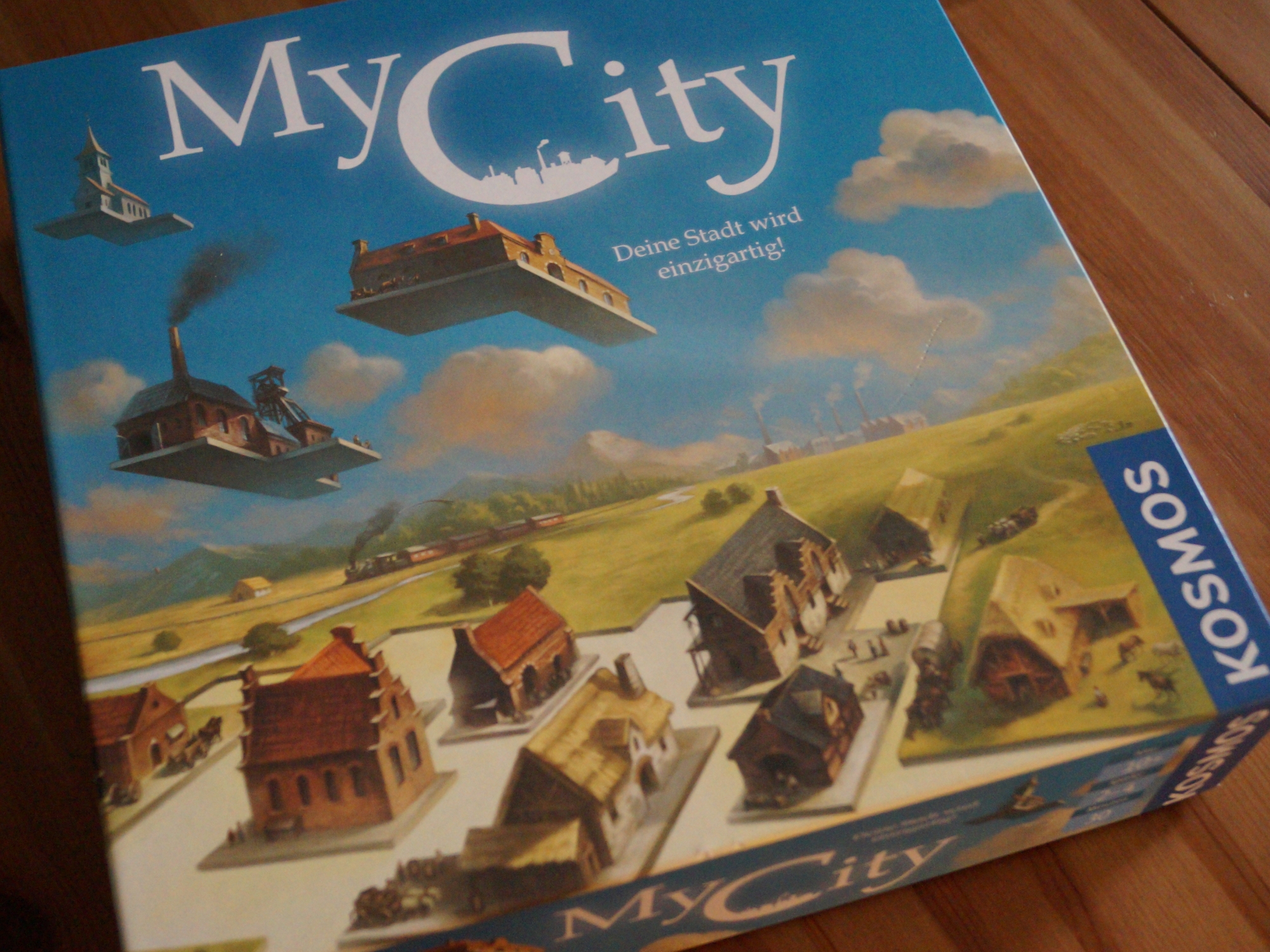 A good story stays with you because of its cathartic ending. Just compare the finale of Star Trek The Next Generation to the end of Game of Thrones. One of those shows still has a passionate fanbase, whereas the other is barely mentioned after a… let’s say… disappointing ending. For the longest time, games were exempt from this rule. The outcome of a game generally didn‘t define its impact on us. It‘s the journey, not the destination, that we remember. With the advent of legacy and its long-term changes to your purchased game’s gameplay and components this convenient separation between good stories and good games begins to soften. This is most evident in My City by Reiner Knizia, published by Kosmos. A good game, which due to the way it ends, sadly registers as pretty mediocre.

But first, the game’s strengths. As can be expected from a design by Reiner Knizia this game has very intuitive core mechanisms. Randomly chosen tiles are placed on your board’s landscape. You want to have as much of it covered as possible at the end of the game to avoid any penalties. New tiles are placed adjacent to any previously placed tile. Certain spaces on the board may not be covered up with a tile, whereas others will score you bonus points if you can avoid placing a tile on them. Rules and visual design communicate these points clearly, so you start puzzling right away, happily covering up a bunch of penalty points with a single tile. My City plays smoothly and quickly, not unlike a lot of roll’n’write games. The only difference being that you don’t write or scribble on a sheet, you throw away afterwards.

But the game’s box doesn’t just hold player boards, numerous tiles and a deck of cards. There are also eight envelopes announcing chapters to play through. As if inside that pleasant little game there is a story that you get to unlock through play. This is the legacy idea, that the box proudly uses to attract your attention. But it’s sadly also the reason why the game ultimately leaves you underwhelmed.

Things start off very promising, the game’s design displaying the kind of care and attention to detail you can expect from a Knizia game. New rules are incrementally introduced after each game. It might be a sticker here, or a change in scoring there. Even though the volume of rules increases slightly over time, My City never seems to lose its focus. At least for the first half of the campaign. With the fifth envelope the clarity of My City’s design starts to give way to additional scoring incentives. But this doesn’t make the game more challenging, or your strategies more flexible. The addition of new goals only dilutes design’s attractive precision. In turn this makes more of your decisions feel disorientingly interchangeable. In the end My City’s legacy campaign simply runs out of steam. Even the joy of getting more and bigger stickers on your board doesn’t help. Worse still, the campaign’s ending only manages to plaster over any excitement and enjoyment earlier games evoked.

Since we’ve wrapped up the campaign, the box has remained on my shelf untouched and unnoticed. Our enthusiasm for the game has dissipated. Even the pompously named “eternal game”, where you play on the back side of the board and untouched by any legacy changes, wasn’t enticing enough for us. Only a small handful of rules additions from the first half of the campaign are integrated in this variant. Tellingly, not a single rule of the campaign’s second half can be seen here.

My City is at its best, when understood at as a close cousin to the roll’n’write genre. (Or flip’n’write, or mix’n’match, or scratch’n’sniff or whatever daft label people will come up with next.) It’s an entertaining little puzzler, that is easy to get into. It plays smoothly without boring you. The small stickers you get to place in particular soon give your board its own, subtly different, character. This is My City at its most charming and appealing. But it might have been a mistake to sell these delicate adjustments as creating a unique experience. This raises expectations that the game can hardly fulfill. Maybe it was also a mistake to stretch the incremental rules changes to a whole campaign of 24 plays. That is how the delightful to play tutorial of My City’s first 12 games, grows into an inconsequential collection of interchangeable ideas.

A good game stands out because it’s the journey, not the destination, that wins us over. Sadly My City loses its way after a few plays and ends up in a place that evokes only an indifferent shrug.

One thought on “Game Night Verdicts #39 – My City”