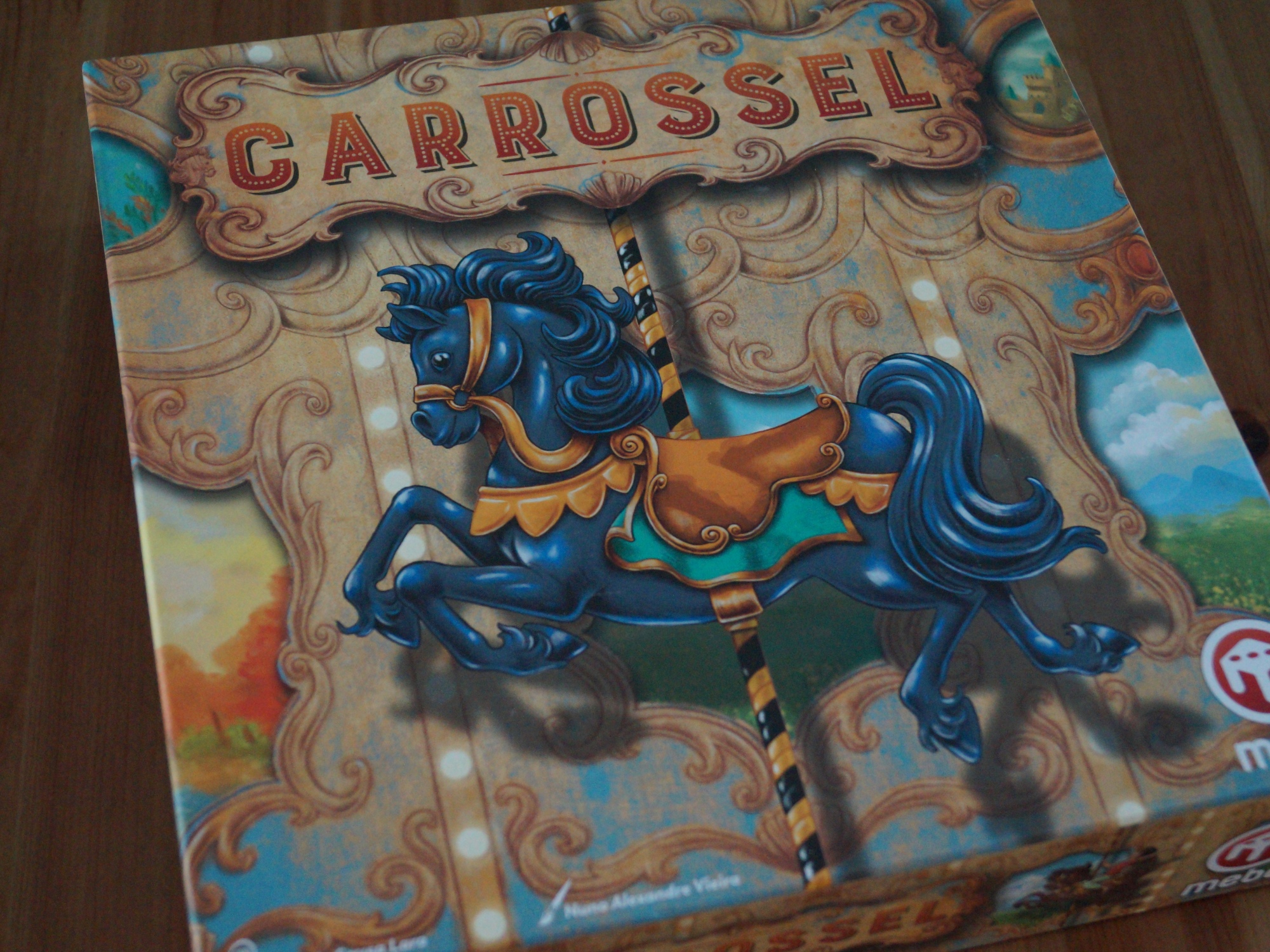 A critical review or critique of a game can aim to do any number of things. Most of the time, it tries to be informative. It frames the game in the right context regarding other games and experiences. The audience is supposed to find out what playing the game is all about. In some cases, criticism can help correct misunderstandings or false assumptions. In rare cases a good piece of criticism opens up a new perspective on a game, which might have been overlooked otherwise. It can present a new approach, that helps to better understand and enjoy the game. Carrossel needs this kind of criticism. So this is my attempt to move past the game‘s rulebook and talk about what enjoyment the game provides.

First off, Carrossel has a lot in common with complex games, without being a complex game itself. This shouldn‘t be read as flaw, but as encouragement to look at the game from a certain angle.

Complex games offer a very specific form of fun. One that can‘t be simply boiled down to winning, or the specific ways you interact with other players. We enjoy complex games for the most part, because of the moments that Jane McGonigal termed „fiero“. A word that is, not without reason, borrowed from the Italien word for pride. It refers to the moments when we overcome adversity. In a complex game we experience those moments, when we‘re almost overwhelmed by the deluge of rules and their intricate interplay but thanks to our dilligent planning and careful decision-making snatch some small personal victory from the jaws of the game. In a complex game, we simply love it when a plan comes together. These games appeal to us because we have to stand our ground against the game itself (and incidentally the other players).

Carrossel then is the kind of game that wants to provide similar fiero experiences to its players. But designer Antonio Sousa Lara has opted not to make use of a wealth of components, many different rules concept and numerous rules exceptions to challenge players. This widespread approach in complex game designs anchors its challenge in trying to comprehend the game‘s mechaninal system as a whole. With every game in which we learn something new about how the system works, we are promised a moment of fiero in some later game. This promise in particular encourages players to repeatedly play a game, they might not have had all that much fun with the first time around. Sometimes these games appeal specifically, because they suggest a learning curve that is so drawn-out as to be practically infinite.

Instead, Carrossel chooses a different path. It wants to be a game that feels complex and hard to master. Yet the challenge you‘re supposed to overcome is found in the hard to predict ways the board state changes over time. All of which is done without relying using dice or other randomizers. But at the same time the game is designed to be easy to learn, giving just enough orientation to keep gut-based decisionmaking competitive. Experienced strategists might scoff that the game‘s presentation merely distracts and obscures an otherwise simple concept. While this argument isn‘t entirely without merit, it misses the point. The indirect connection between player decisions and changes in the board state doesn’t hide a simple challenge, it is the focus of the game.

Said board represents the carousel the game is named after. Each turn you place tokens on the area allocated to you, before the carousel moves again. Whenever a row or column of three tokens in your current area matches the cards in front of you, victory points get handed out. Some further rules nuances and options are added to push back the threat of calculability as the game progresses.

While most other complex works of indirect interaction (commonly known as multiplayer solitaire euros) require a somewhat holistic understanding of the game‘s rules to make a win feel earned, Carrossel aims to reward a keen eye for opportunities and risk-taking. The crowded board isn’t a sea of traps designed to put more and more constraints on you for making sub-optimal choices. It provides a spinning wheel of possibilities for you get it on. Carrossel’s moments of Fiero are not the result of long-term plans that amass a huge score and propel you into the lead. This game is not about Rosenberg-style master plans, that culminate in an awe-inspiring avalanche of victory points.

Carrossel is a game about noticing a promising opportunity and grabbing it. Its continually turning board doesn‘t stop, so you never get fixated on pursuing one singular strategy. It‘s a style of play you need to allow yourself to get into, so you can embrace the fun of it. If you can do that, Carrossel picks up speed quickly and regularly deals out moments of fiero.

Unfortunately the rulebook insists on laying out in detail how to operate the game, which ends up leading you down the wrong path of figuring out what Carrossel is about. Because a rulebook isn’t just a manual, it’s also an introduction to the game as a whole. It contextualizes our actions in order to give them weight and should have emphasized the playful nature of watching a carousel go round and round. Instead the rules are presented in a dry technical manner, suggesting that they provide a complex challenge you need to overcome to get to fiero. Consequently, when the actual flow of the game turns out to be much easier to grasp than the painstakingly detailed instructions implied, surprised disappointment is likely to follow.

Carrossel plays most naturally, when you refuse to take on the overwhelming effort to plot out and consider each and every eventuality and instead just cast a wide net to let the scoring happen suddenly and surprisingly. Those are the moments when Carrossel comes alive. The messier and more unweildy the board becomes, the prouder (Italian: più fiero) you are at scoring another few points out of it. Overcoming this type of adversity is both charming and entertaining.