Intertextuality refers to instances in which elements of one story resurface as part of another story. In modern pop culture, the term „crossover“ has become a common way to describe it. If, for example, Batman (real identity: Bruce Wayne) appears in the comic book of Superman (real identity: unknown), we can call this intertextuality. If you were to extend this idea beyond the confines of a single medium, you would use the term transmediality: a character or story is realized in different media.

Romeo & Juliette is a cooperative, 2-player game about young lovers from Verona who meet a tragic end due to a feud between their two families. A now deceased Englishman from Stratford-upon-Avon first brought this story to the stage. Now it is up to us to reinterpret the story. Because the interesting thing about Romeo & Juliette is that it isn’t a simple retelling of the play. 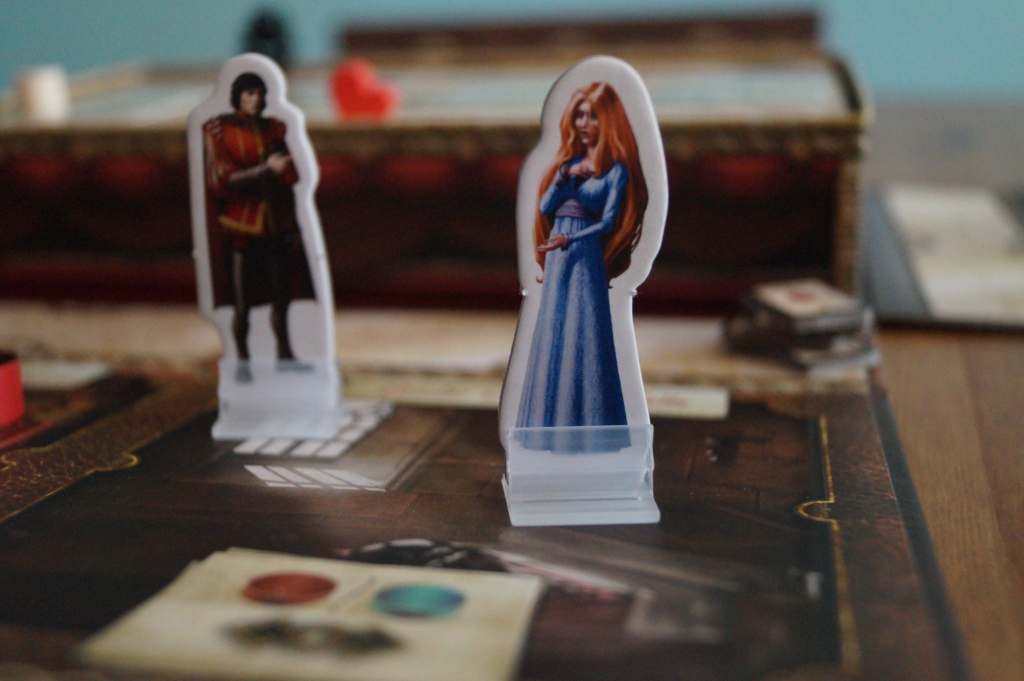 Here, the lovers secretly meet in a cell.

Instead, players act as the primary narrative voice, spinning the fate of Romeo Montague and Juliette Capulet. They are not entirely free in what they get to narrate, though. It is, for example, not possible to pair Juliette with Mercutio instead of Romeo. Or to set the story in a hyper-stylized Miami where the young men threaten each other with pistols instead of swords. To choose a really absurd example. But it is possible to change the outcome of the story using the rules of the game.

In the context of a competition this may seem trivial. A game does not change its core just because of who wins. But in the context of a story, a new ending is a fundamental shift in what the story is about and what genre it belongs to. Imagine an ending of Star Wars in which the Death Star doesn’t explode and the rebels fail. Or an ending of Pirates of the Carribean in which Jack Sparrow ends up in jail and Elizabeth Swann is married to Captain Norrington.

A comparable shift occurs here with the game’s three possible outcomes. One of which mirrors the ending of the play. The players lose and Romeo & Juliet are dead. But we can also save their lives, sacrificing their love. That, too, is considered losing. Last but not least, there is also the possibility to win the game. This happens when Romeo & Juliet fall in love with each other and also manage to reconcile the houses of Montague and Capulet.

The weight of these resolutions is closely tied to how difficult it is to achieve them. We have to put in quite the effort to bring the story to a happy end. Romeo & Juliette is a challenging game. For one thing, grasping and internalizing the different game mechanics isn’t as simple as in a game like Hanabi. Gameplay and also its restrictions are much stricter here and observing them at all times is mandatory. Only then can you rely on the logical conclusions you have to draw during play. Every action of partner must be observed, evaluated and serve as the foundation for your deductions, in order to help Romeo & Juliettte be in love and live.

Co-Designer Julien Prothière follows up similar ideas to his severely underrated previous design Kreus (2016). Carfeul observation, clever deductions and a pinch of luck also helped you win there. In Romeo & Juliette, you play cards from your hand to move tokens in such a way that the two families do not cross paths, while the two lovers meet in secret.

If you’re familiar with the original story, this might further motivate you to avert the tragic ending. We don’t want to be responsible for the two youngsters taking their own lives. For us, it is not only a matter of victory or defeat, but also of the emotional impact that the outcome of the story will have on us. It also fits in with the romantic ideals of this young couple that a life without love is tantamount to defeat.

But it is not the game telling this story. Nor do we retell our experience as a story. The story is told through our actions. We send Friar Lawrence to the salon of the Montagues, or Juliet to the church. We make sure that hatred only spreads on the streets of Verona, and Romeo waits safely outside Juliet’s balcony. The story is told in the moments when we take action.

It is up to us whether we only see the mechanisms and how they interlock, or whether we use the means spread out before us to actively experience this story. During the game we rearrange the set pieces of the theatre play in order to go through our interpretation of the story. Instead of dialogue that delicately draws the characters, we try to understand and comprehend the choices of the other player. Instead of surprising twists in the plot, we see our chances dwindle with our freshly drawn hand of cards, or suddenly recognize the many great opportunities in them. 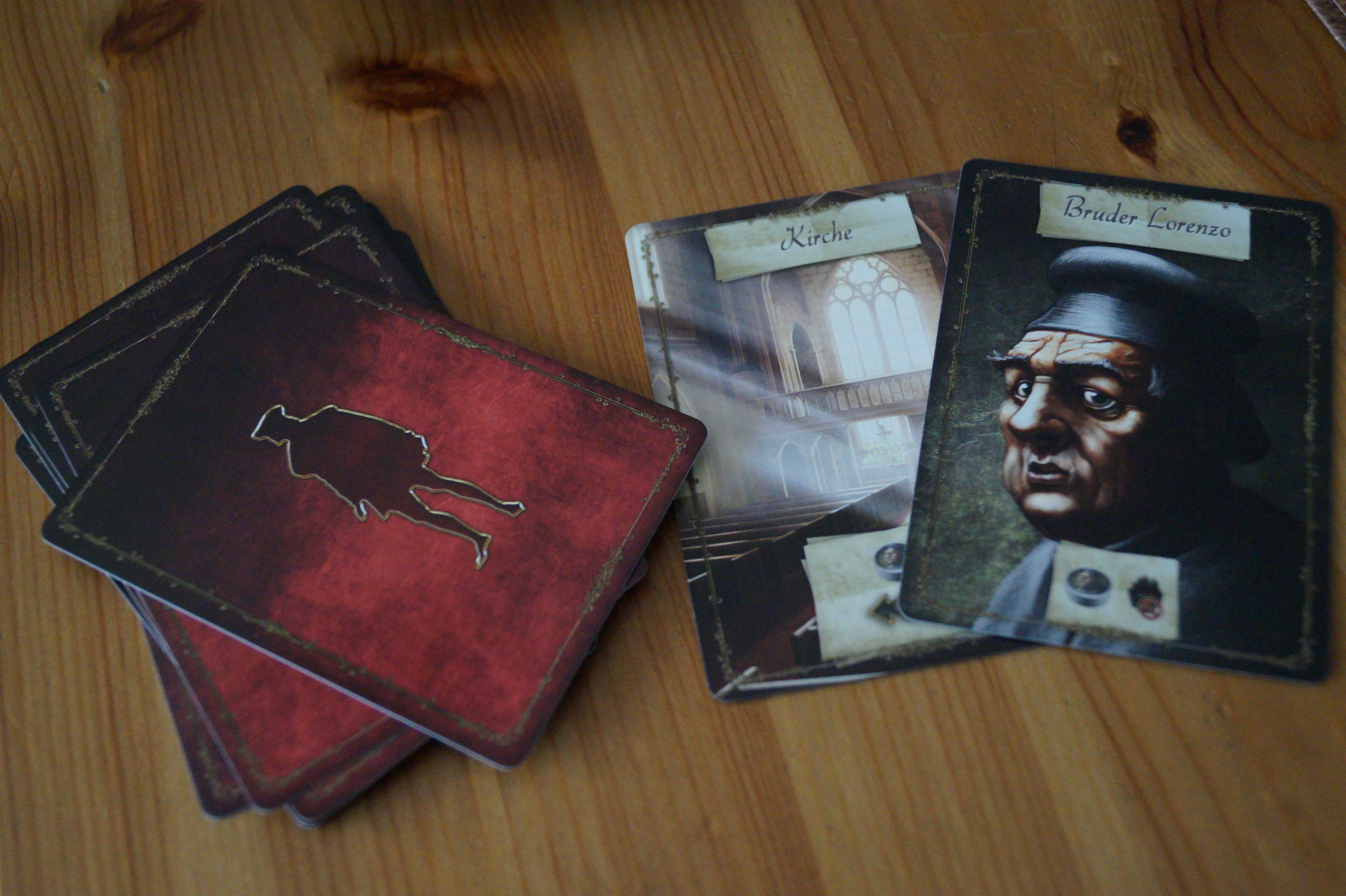 Cards are our only means to save the lovers

We don’t lean back comfortably and watch the melodrama unfold from a distance, we are right in the thick of it. We suffer along with the characters because we know how they might suffer in the end. We may not necessarily see ourselves as Romeo or Juliette, but we are at least responsible for their love and happiness.

This all assumes, however, that play always tells a story. In this case, it’s a widely known story, that has been seen staged in all manner of ways in theaters, cinemas or even the school auditorium. With Romeo & Juliette, two players now get to create their take on this story and perhaps achieve the ending that has always been denied to the young couple.

Romeo & Juliette is a demanding and intense game, if the two players are open to this unusual experience. Its lavish game box contains a tricky mental challenge for logical thinkers, but also a story that can coax out an emotion or two from its players; hinting at what the medium is capable of.