Some games surprise you. Not because they are unexpectedly fun or pointedly aren’t. They surprise you because their strengths are not where you expect them to be at first. 7 Wonders Architects, for example, clearly follows 2011‘s Kennerspiel des Jahres winner in name and theme. The short play time already tells you what you get in its bulky box: a shorter and beginner-friendly version of 7 Wonders. It is that; but it somehow isn’t and yet is that again. That’s what’s so surprising about it.

The sorting boxes inside the box will be the first thing to catch your eye, feeding into a gamer’s latent fetish for organization with an almost indecent level of directness. Once you’ve stickered the plastic slipcases and filled them with the appropriate cards and tokens, normal people will see a game that seems to scream „pick up & play“. Just grab a box, unpack it and (supposedly) start playing right away. While that isn’t true, it’s the impression you take away from it. Much like it is with questions of balance and fairness, our impressions are more important than reality.

7 Wonders Architects’ next strength is that it seems simpler and easier to learn than 7 Wonders. On your turn, choose a card from the right, left or center pile and place it in front of you. Depending on the type of card you drew – and the ones you already have there – you may have to perform additional steps. Flip a tile, take a tile, swap a tile or build the next level of your wonder of the world and thus get closer to the game’s end. There are five different colors in the game, so up to five different sets of instructions to keep in mind on your turn.

The reason why learning these if-then clauses seems so simple is not least due to the ingeniously designed rule booklet. While 7 Wonders – despite its simpler turn sequence – came with an impressive 12 pages and a rules aid, 7 Wonders Architects gets by with two double-sided A4 pages effectively. Instead of spending time on long thematic explanations or evocative descriptions, it’s entirely focused on what players actually do. Layout is clear. Sentences are short. Illustrations are unambiguous. The rulebook does it all very, very well. The complexity of the game is demystified while still clear and complete.

7 Wonders Architects may also seem much easier to gamers because decisions are flatter and narrower. You choose one of three possible cards, and then blindly execute what the rulebook says. This is very different from the original game, where you might have to choose from up to 7 cards and their conditions had to be met by the cards already in front of you. While this required less rules knowledge from you, it also came with strict long-term effects. Choosing the wrong cards at the beginning of the game, could mean you had far fewer options towards the end.

Yet the genius of 7 Wonders was that much of what “the veteran gamer” considers necessary to play, you could learn organically by playing the game. The importance of military cards becomes apparent when your neighbors score points, and you collect -1 tokens. “Hate drafting” emerges as a tactical option, when somebody suddenly scores massively at the end of the game using some occult practice called “science”. Trading cards reveal their benefit, once you realize how much flexibility they grant in playing new cards. A lot of what draws people into 7 Wonders still, is how you gain this knowledge through play. 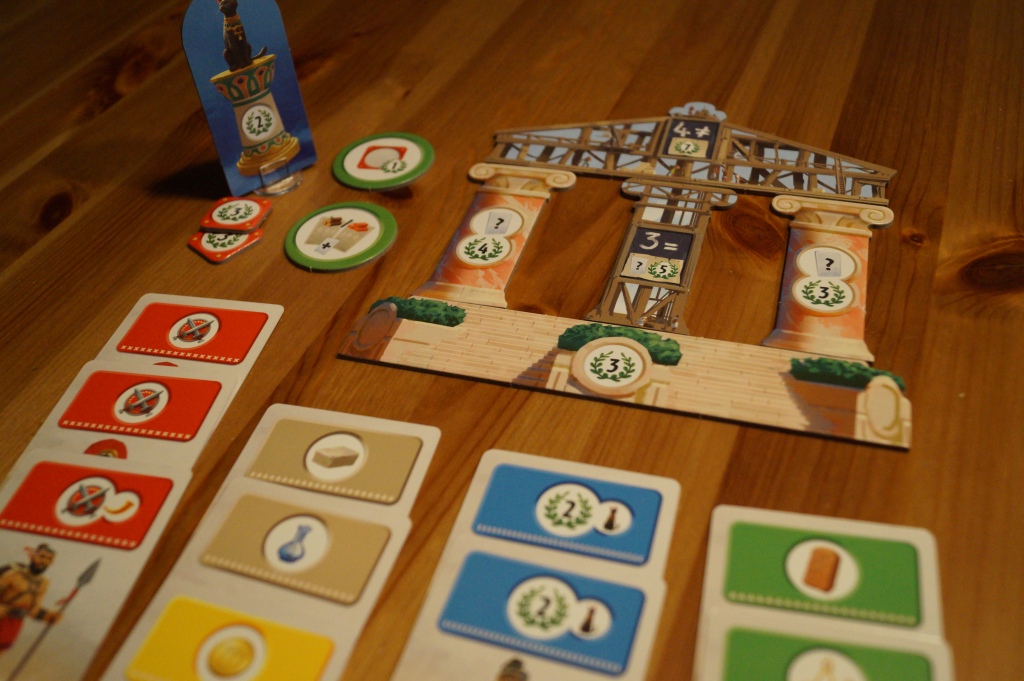 Symbols are clear and easy to read

7 Wonders Architects does not have an emergent learning curve like that. Your first game will already let you explore most of the game’s tactical and strategic depth. It’s a race for victory points, where you hope to draw the right cards. Sometimes you succeed, sometimes you don’t. If Fortuna wills it, you set off a chain reaction which you grants you even more cards. This feels nice, but it also reveals which game 7 Wonders Architects is actually related to. and this is perhaps the biggest surprise of all. 7 Wonders Architects doesn’t play like 7 Wonders, it plays like Machi Koro.

Instead of capricious dice forcing you into inaction, every move is a step forward here. Your choice of card lays the tracks, and you hope that behind the next bend the roller coaster will rush down and propel you towards the finish line. While each card brings an advantage, the exciting question is whether the game will last long enough for your choice to pay off.

That’s entertaining and works particularly well with kids. There is a reason why Machi Koro made it to a Spiel des Jahres nomination in 2015. However, if you’re already familiar with 7 Wonders you will find little to draw you in deeper and keep you here.

Rather, 7 Wonders Architects serves as an entrée, a precursor to the original game. The iconography and visual concepts are closely related. If you’ve played 7 Wonders Architects a few times, you are more likely to take the plunge into the supposedly deep waters of 7 Wonders. After all, its gameplay is simpler, while the decisions are more demanding, and the three ages lend each game a dramatic arc.

7 Wonders Architects is not 7 Wonders Mini. But it paves the way for young players to venture into the modern classic it takes its name from. The leap from novice to gamer has rarely been as subtly prepared and easy to make as it is here.